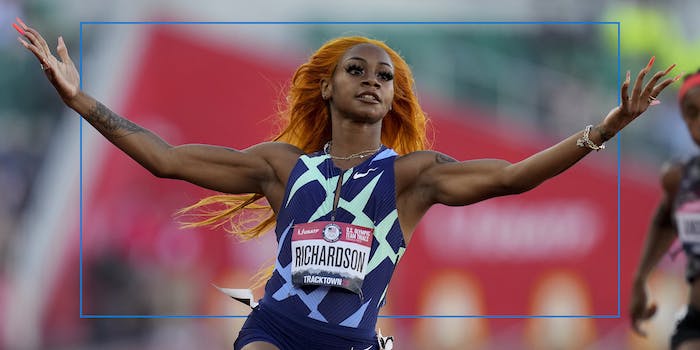 A more inclusive court of public opinion has her back.

It should have been Sha’Carri Richardson’s summer. The would-be Wheaties-box hero failed a drug test ahead of the Tokyo Olympics. Fans were outraged, as they felt she was treated unfairly and held to dated standards surrounding marijuana use. For the Dallas sprinter, a wave of social media support softened the blow.

Months after Richardson’s suspension was lifted, she participated in the 100-meter run in Eugene, Oregon. Leading up to the race, Richardson posted a video that many said was “cocky.” In it, she sat in a salon chair getting her hair done and mouthed, “It’s game time bitches,” along to a Nicki Minaj voice over.

She finished in last place. Now, several people are calling for her to “humble herself.” It’s revived ugly truths about how Black women are treated on social media. A closer look at the conversation surrounding Richardson shows just how ugly it can get on Facebook, Instagram, and Twitter, but also that there’s hope.

Several social media users are calling for others to stand up for Richardson, reiterating the history behind what it looks like to be a Black woman in sports.

Earlier this month, she responded to Olympian Usain Bolt, who told her in the press to “train harder” and “not say too much.” Richardson, via Instagram Story, said Bolt should “Stop speaking on me when you don’t even speak to me.”

According to data from CrowdTangle, 1,101 public posts about Richardson received more than 700,000 interactions across Facebook alone the week of her feud with Bolt.

Back in August, a day after Richardson’s surprising loss, Twitter user @DonTheCreator_ posted a tweet that sparked positive momentum. That’d be Donovan Wint, a 23-year-old graphic designer from Florida, who regularly tweets about entertainment and Black culture’s role in society. This time, he happened to go viral.

“The obsession with humbling black women is very odd,” the knowing tweet read.

In one sentence, it created enough noise to re-frame perception of and spark support for Richardson. On the timeline, public opinion is tallied like a scoreboard. Time and again, for better or worse, overwhelming groupthink creates new conventional wisdom where previously only a few gatekeepers could. For marginalized users, Richardson’s unfair public shunning was an inflection point to chime in and push back.

“A lot of other men accused me of pandering to women for likes and it simply isn’t true,” Wint said in an email. “I just saw something I didn’t agree with and shared my opinion,” he added.

Wint told the Daily Dot through email that he made this statement because although Richardson was receiving a ton of hate, her story is a part of a broader issue. He believes that every time Black women exhibit confidence, or “cockiness,” people do not see it as being competitive. Instead, it’s an opportunity to call for the “humbling” of Black women.

He added that Black women, athletes in particular, are never treated fairly in sports. 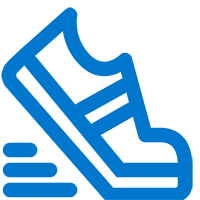 “Black women in sports have been deemed as overly aggressive, hyper-masculine, and other negative things just because they exceed at what they do,” he said. He cited examples like Serena Williams, Simone Biles, and late Olympic gold medalist Florence Griffith Joyner.

This summer Biles was attacked on social media for choosing to withdraw from various Olympic events. She explained that her mental health was the reason behind her decision. Although TV pundits like Piers Morgan called the move “selfish,” across social media she received swift, clear, and overwhelming support for bowing out.

Williams has also had to endure similar judgment. In 2018, in a match against Naomi Osaka, Williams became frustrated after the referee called a code violation after her coach was directing her from the sidelines. The game continued, and Williams slammed her racket on the court. Soon after the match, a cartoon that was branded “non-racist” by Australia’s Press Council showed Williams, with exaggerated physical features, stomping on her racket.

In the mainstream press, the cartoon was labeled as “controversial,” but on social media, its racist depictions of Black people were called out. Three years later, social media users are quicker to respond and shape these narratives.

She wrote in her post, “I think it’s odd because they don’t do the same to men but actually push/embrace confidence.”

Her name is Akirra Raheem, 24, from Illinois, and she believes that male athletes can display confidence, but no one really calls them out.  “They can be cocky, they can be cocky in their sport. And they don’t even have to be great at it,” she told the Daily Dot.

Like Williams and Biles before, Raheem sees coded language and double standards in what’s happening to Richardson.

“I do think it has to do with her being a confident, Black woman,” she said. “I just feel like a lot of people are just so focused on humbling women, and letting them learn a lesson.”

Dr. Jennifer McClearen, a University of Texas at Austin professor who studies identity and representation said that female athletes, especially Black female athletes, have been scrutinized for years.

“Research shows that Black female athletes have long been scrutinized, evaluated, and criticized in sporting spaces according to different standards than white women or Black men,” McClearen said in an email.

McClearen also discussed how Black women are characterized in the media. Usually, she said, Black women who are seen as assertive are sometimes questioned in their femininity.

“Black women are also held up against white women peers and deemed as lacking in terms of white feminine ideals of humility and passiveness,” McClearen said.

As an example, McClearen cited South African runner Caster Semenya, who has long been scrutinized for having naturally higher testosterone levels. Those critiques didn’t extend to white women who were athletic and strong.

“I remember when Ronda Rousey was praised for her confidence and body positivity while she also had a very aggressive hubris about her. Many people accepted this sort of performance as empowering in Rousey, but wouldn’t extend that to athletes like Richardson or even [Serena] Williams,” McClearen added.

It takes people like Wint and Raheem to continue to speak out on their social media platforms about the problems Black women face in sports. When it comes from thousands of people shouting at once across the internet, it makes the issues more real.

“I believe if we as a community continue to point out the injustice more and more things will inevitably change,” Wint said.

The history of Black women athletes receiving uniquely harsh scrutiny from non-Black media and fans is likely to continue. Social media, however, is where people can discuss and learn. And as Richardson’s show of support this summer hints, public attitudes are becoming more defensive and protective of Black women.