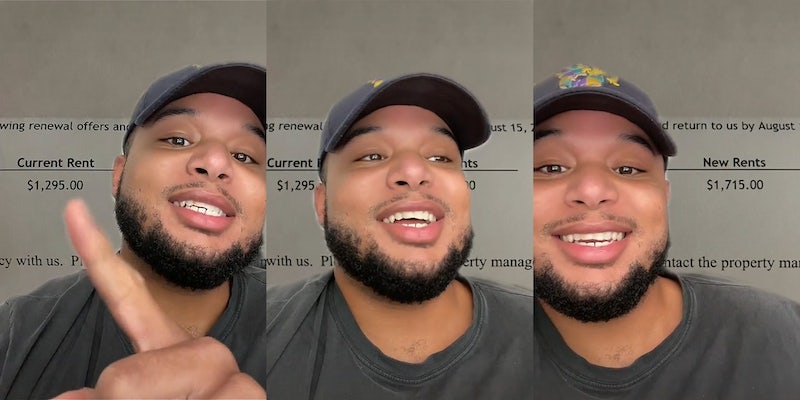 ‘Rent going up but apartment don’t be leveling up’: Tenant shares rent increase for Dallas apartment in viral TikTok

'They want us to make 3x the rent but they ain’t paying us 3x our paychecks.'

A Dallas-based tenant shared his rental increase on TikTok, where people who also live in apartments are pointing out that salary increases and apartment upgrades are not keeping up with the cost of living.

In the TikTok, user @goldenflacko4 says he’s been living in Dallas for three years in the same apartment. During that time, he claims he paid $1,295 per month.

Upon renewing his lease, he discovered that his rent was set to go up—by over $400.

“Do y’all see that?” he asks in the video. “And it’s only getting worse. … Now granted, my lease didn’t go up as much as a lot of people’s lease[s] have gone up, but this is ridiculous.”

On its website, the Texas State Law Library explains that “There is not a statewide law that places limits on how much a landlord can increase the rent when a lease is renewed.”

This has led some landlords to suddenly raise prices by extreme amounts upon lease renewal. In May, WFAA shared stories of people, like a 66-year-old man from Garland, Texas, whose rent increased by $800 upon renewal. A similar story in by an NBC affiliate in Dallas alleges that another person’s rent went up by $750 upon renewal.

“The rent is so outrageous right now, and it’s leading to a rise in evictions too. They’re not unrelated,” Sandy Rollins, executive director of the Texas Tenants’ Union, told WFAA. “And people who start looking for a new place are running into the same problem.”

Dallas is especially susceptible to this issue. The same WFAA article quotes a stat from apartment locator service SmartCity, which says that rents are rising by an average of 10 to 15% across the Dallas area. This is in contrast to the 3% and 5% increases seen in previous years.

“Rent going up but apartment don’t be leveling up whatsoever,” one user wrote.

“The way they be raising rent and expecting us to raise kids absolutely not,” a second added.

“Ppl already struggling to meet the income requirement from the beginning. But office doesn’t ask for proof of income when raising it,” a third stated. “Makes no sense.”

“They want us to make 3x the rent but they ain’t paying us 3x our paychecks,” a fourth shared.

Others questioned why @goldenflacko4 lived in an apartment at that price, when, according to some TikTokers, he could be living in a house.

Ignoring the fact that “Texas has seen a 43% increase in the median cost of buying a home” since 2016, per the Texas Tribune, @goldenflacko4 says that buying a house is his long-term goal—he just can’t afford to do so at the moment.

The video then shows two properties in Dallas. One is around the price of his apartment but is far outside of Dallas and lacks many features, while the other is within Dallas and has the same amenities, but is significantly more expensive.

“Needless to say, it doesn’t make sense to rent a house over renting an apartment, in my opinion,” he concludes.

“And you have to do way more maintenance or wait longer to get things fixed,” a user said about living in a house compared to an apartment.

“You’ll be paying WAY more and then everything else included,” another user added.

The Daily Dot reached out to @goldenflacko4 via TikTok comment.