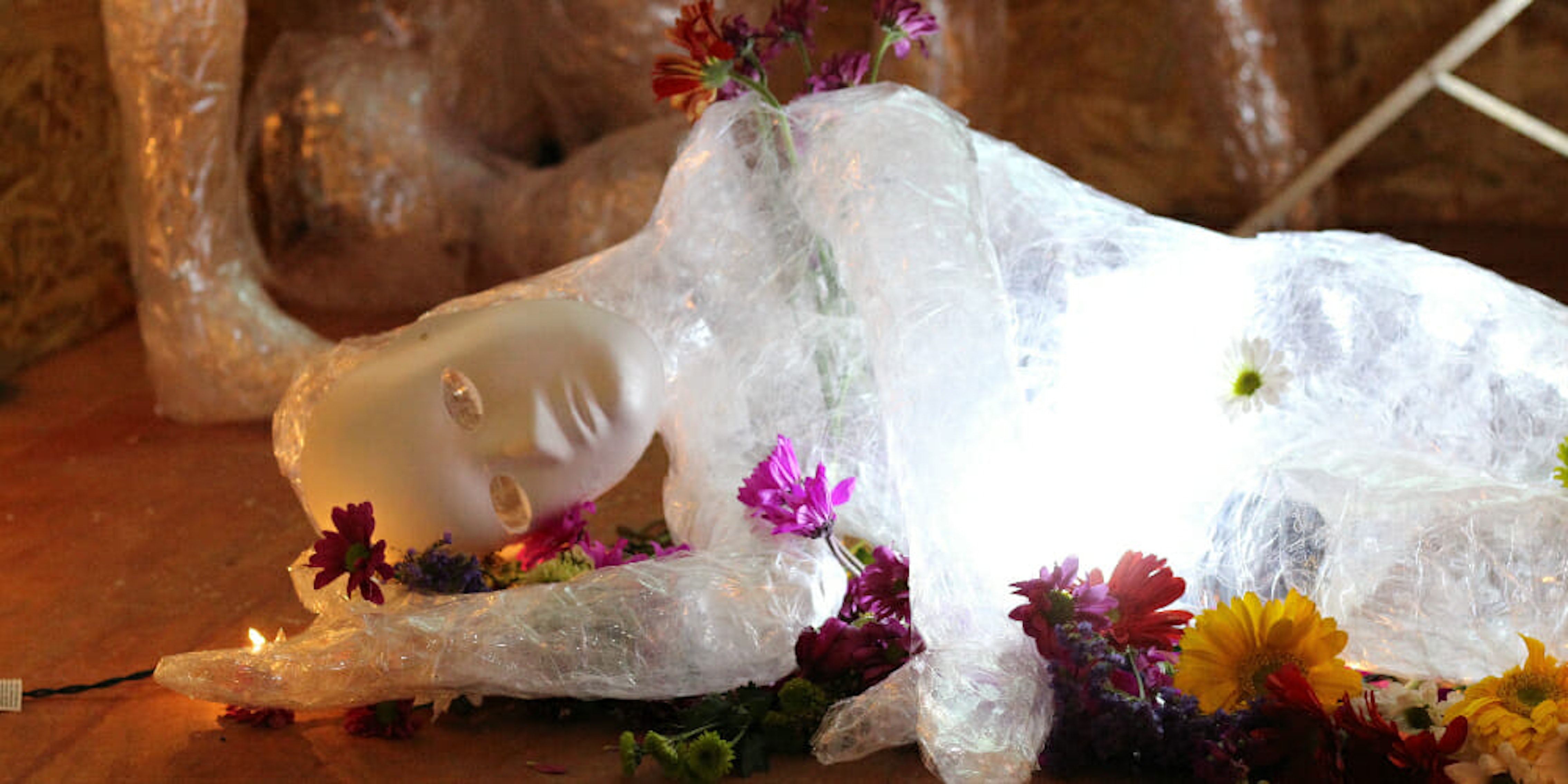 'This is a human right.'

It’s called “la hielera,” which is Spanish for “icebox,” and it’s the gruff welcome that many immigrants in the U.S. receive: A frigid, tightly confined space where they await their legal fate. At SXSW on Friday, artists protested these iceboxes with a powerful art installation.

They made frozen sculptures of children—along with audio playing from one child’s heartbreaking experience. It was all part of RAICES Texas’ newest campaign launch: a call to end these things.

“I couldn’t sleep because the room was small and cold. On the ground, there was nothing for us to lay down on, and it felt frozen,” the child said in the audio recording as she recounted her experience in the icebox. “I was extremely cold, and I felt sick. Sick with cold… I didn’t like it. I had never been caged like that… I started to feel like I couldn’t hold on.”

A migrant’s first experience in the U.S. is often spent being contained in the “hieleras,” or jail cell-like rooms with freezing temperatures. Immigration and Customs Enforcement (ICE) says it’s to prevent illnesses, but many see it as inhumane treatment of those trying to seek asylum. Two children have recently died after being placed in these iceboxes.

RAICES, an organization providing legal services to immigrants, often hears of its clients’ experiences in the hieleras, many of whom are children. The group launched the campaign at SXSW to specifically abolish the iceboxes and spread awareness about them as participants got the chance to step foot in the -10-degree pods themselves.

“If (the participants) feel extremely horrible setting foot in there, can you just imagine what the kids feel like experiencing it themselves?” RAICES spokesperson Ana Maria Rea told the Daily Dot on Friday. “We need to abolish these forms of torture.”

“We are not trying to make this an immersive experience or a cool little SXSW event,” Silguero told the Daily Dot. The art activist said he wanted to take up physical space with the “frozen children” sculptures so attendees won’t be able to ignore the issue because “it’s there, it’s real, and it’s in your face.”

A mural is also placed on the side of the pod depicting migrants from all over the world as a chain-link fence separates the mural from the public—a visual representation of immigrants being restricted from the U.S.

“As creatives, we are using our art skills as a social tool to start this dialogue and using our resources to educate the people about these issues and inspire the others to get more motivated and involved to get the government moving,” Riojas told the Daily Dot.

Attendees also have an opportunity to write what they think about our country’s immigration policies on bandanas to tie on the fence. Rea said she hopes the installation will generate traffic on social media where people can post their experience at the event, along with the #AbolishICEBox hashtag in order to start a conversation surrounding the issue.

@RAICESTEXAS together with artists @yocelyn_riojas & @JerrySilguero launched a campaign to end the practice of detaining migrants in hieleras. This powerful installation is live now in downtown ATX. #AbolishICEBox #SXSW2019 https://t.co/9XAdnXh0nR

Listen to the audio.

There is no reason to treat #immigrants + #refugees with #cruelty.
Shameful.

Everyone released from immigration detention along our southern border talks about the horrible, inhumane iceboxes, details described w/ remarkable consistency. This is no welcome for innocent & exhausted travelers who have committed no crime. #AsylumIsALegalRight #AbolishICEBox https://t.co/B08tGwYE8e

“We are really just hoping to generate a conversation,” Silguero said. “This is a human right and everybody has a right to seek asylum.”

The event is open to the public during SXSW.