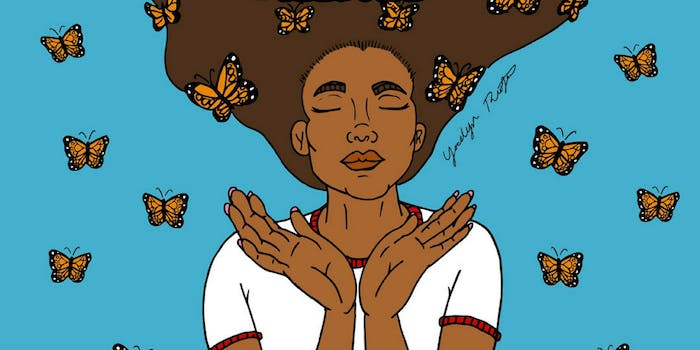 She is calling upon other artists of color to help in the movements for undocumented people.

A Latinx woman smiles peacefully, her eyes closed, her face tilted as if she is absorbing the rays of the sun. Her open palms frame her face. Her hair is free and charged toward the sky. Orange butterflies flutter about her.

The woman, nameless, looks like anyone you might know—a school friend or a coworker. She represents 3.6 million Dreamers, a term used to refer to undocumented immigrants brought to the United States as children by their parents in search of a better opportunity.

This illustration of an Afro-Latina surrounded by butterflies has become a viral symbol of unity for Dreamers in their strife to find a pathway to naturalized citizenship. Her creator, Texas-based Latinx artist Yocelyn Riojas, hopes the message “My dreams are not illegal” is just the beginning of a new wave of “resistance art” that rallies against the anti-immigration efforts of the Trump administration. It’s an artistic movement she wants led by those connected to Dreamers, Temporary Protected Status (TPS) holders, and other undocumented immigrants—not created by unaffected big-name artists and corporations.

Riojas, 26, is the granddaughter of Mexican immigrants and the daughter of first-generation migrant workers turned attorneys. She was born in Mexico but is a U.S. citizen and grew up along the Texas-Mexico border in the city of Eagle Pass. Currently obtaining a Master of Fine Arts degree at Texas State University in San Marcos, Riojas began siphoning Latinx culture and social issues into her work while earning her undergraduate degree in Dallas and solidified her career as a “resistance artist” last summer, during a protest in Austin against anti-sanctuary city legislation.

Even though she gained local notoriety for that protest piece, featuring a young woman in a traditional Quinceañera dress, it wasn’t until she whipped up the Afro-Latinx surrounded by Monarch butterflies, that other activists involved in the movement for citizenship for undocumented immigrants began to take notice. She created it on Sept. 5, the day that Attorney General Jeff Sessions announced that the Trump administration would be rolling back the Deferred Action for Childhood Arrivals (DACA) program, which allowed undocumented immigrants who came to the U.S. under the age of 16 and met certain requirements to work legally. In setting the program’s expiration for March 5, the Justice Department gave Congress six months to come up with a plan to give recipients a pathway to citizenship—meanwhile, thousands have been left vulnerable to lose their DACA protections with each passing day.

It took all of two hours for Riojas to fully conceptualize, illustrate, and share the image of the Afro-Latinx woman, a representation of the most vulnerable and innocent of undocumented immigrants covered by the program. These are people who were brought to the U.S. with no choice in the matter, who often didn’t know they were undocumented until later in life, a decision made by parents to shield their children from the fearful, isolating realities of growing up with such knowledge.

“After the Trump inauguration, I started drawing more just in support of my friends who are Dreamers who just need something to give them hope, or just know that that’s my way I’m able to support [them],” Riojas told the Daily Dot. “[The DACA announcement] was just a sad morning. All my friends were just messaging each other, talking about the disappointment and the fear of what would happen if [their] DACA expires. From those reactions is what came the inspiration for the butterfly piece.”

Later that evening, Riojas said, she returned to her phone to find tens of notifications sharing news of the artwork’s success. The official Instagram and Twitter accounts of the Women’s March even shared the illustration.

Today's #SignOfResistance is by @yocelyn.riojas. Take action to #DefendDACA and #DefendDREAMers today. 1. Visit dreamacttoolkit.org for a handy tool to call/tweet at key members of Congress and urge them to pass the #DREAMAct. 2. Visit weareheretostay.org to find a #DACA-related action near you. . . . [IMAGE DESCRIPTION: A sky blue background with a digital illustration of a woman of color wearing a white t-shirt. Her eyes are closed. Her hair has butterflies fluttering around it. At the center of her hair is a larger butterfly with the words "my dreams are not illegal" at the center of it.]

“It’s just a unique experience getting to be a part of everything, and seeing everybody hold my art and hearing how much it means to them,” Riojas said. “I get people even from France who are so happy that there’s more out there that shows different faces that we don’t typically see in the media…I never thought anybody would have an interest in my work because it’s so ‘niche’ to my community.”

Internet “virality” is valuable to Riojas but not because she’s hungry for attention or seeks to become a face of the movement for undocumented immigrants, an effort in which she’s deeply involved but which doesn’t affect her personally since she’s a U.S. citizen. For her, it’s about adding inspiration for and general representation of Latinx communities to American culture.

This piece is a sugar skull virgin that was inspired by the religious imagery, specifically the iconic image of La Virgen de Guadalupe, patrón Saint of Mexico City, that I grew up with in my hometown and community. I chose to depict a female sugar skull, as she is representative of all the strong mexican and latina women that have passed. This piece honors their fight and courage they left behind for today’s latinas and latinx culture. . . . . #latinxscreate #virgendeguadalupe #sugarskull #diadelosmuertos #dayofthedead #latina #latinx #latino #artist #illustratorsoninstagram #illustration #mexican #american #instart #365daysofcreativity #yocelynriojas

Riojas’ other work includes illustrations responding to last year’s deadly white supremacy demonstration in Charlottesville, Virginia, and President Donald’s criticism of Carmen Yulín Cruz, the mayor of San Juan, Puerto Rico, after Hurricane Maria. Her work has been recognized at multiple art shows and has been used across social media and at resistance marches. She’s even been able to gain funding and receive commissions to create more inspiring work. But when it comes to “resistance art,” Riojas says she often feels alone; she rarely sees other creators of color sharing their works—or at least, getting attention—for the cause.

While there are other millennial artists making conscious efforts to visually represent Dreamers, such as Los Angeles-based Hawaiian artist Ashley Lukashevsky, it may be the case that the internet’s propensity to elevate the Shepard Faireys and Banksys of the world has continued to whitewash work by female artists of color who are attached to the resistance scenes they’re illustrating.

“At the end of the day, all these famous people [representing the movement with art] get to go home and they don’t have to worry about it, or change anything… There are no concerns about what happens to their family or friends, or what people will say to them just because what they look like,” Riojas said. “It’s like, ‘Thank you for making a poster for the movement, but this has nothing to do with you at the end of the day.’ That’s great, but we need to see more brown faces out there creating art for the voices that they know.”

In her next “viral” art effort, Riojas has volunteered to help create a life-size art installation of Monarch butterfly wings for a Feb. 28 event titled “Immigration Is Sweet” hosted by Jolt, a Texas-based nonprofit encouraging civic engagement of young Latinx Texans. Event attendees will be able to pose in front of the butterfly wings, which will be lined with conchas, or Mexican sweet bread, and will also feature a depiction of the Afro-Latinx woman from her Dreamer illustration. Jolt will also be setting up the wings installation at various venues during South by Southwest, where Riojas hopes her work may inspire other Latinx artist to get involved and continue the inspiration, too.

Even though two federal judges have since issued injunctions to the Trump administration’s DACA order, it’s unclear how much longer it will take Congress to agree on a citizenship resolution for undocumented immigrants. Until then, these movements are going to need any inspiration they can get.

“For us, we’re trying to empower our own people of color to go out there and be more involved, because they have the power to influence change,” Riojas said. “We’re not trying to convince anyone else except us [those within the Latinx community]—so why do we need someone else creating art that has nothing to do with it?”

Correction: An earlier version stated Riojas’ parents were born in Mexico; her grandparents were Mexican immigrants. We regret the error.