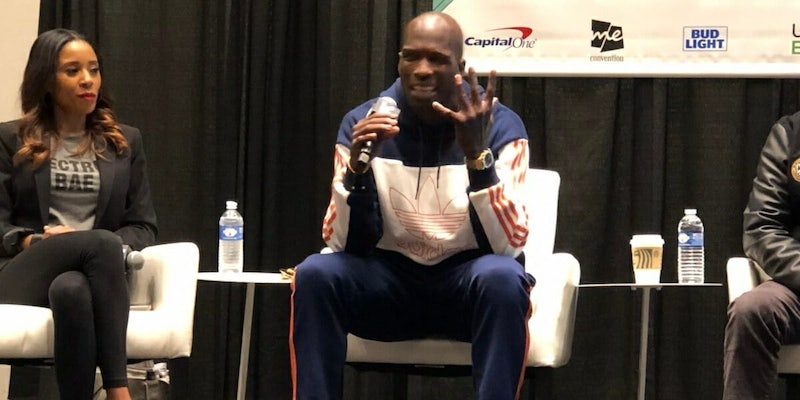 Johnson is passionate about football, gaming, and using social media.

Chad Johnson played in the NFL for 11 seasons. He played under one of the most media-repressed organizations with the New England Patriots. He played under a conservative coach in Cincinnati who only rarely appreciated Johnson’s candor and commentary. And plenty of times when Johnson tried to let his personality shine or to celebrate another touchdown in an unconventional way, he was fined or punished.

It was enough for Johnson, who participated in a SXSW panel on Friday titled “The eSports Gamification of Real Sports,” to call his previous employer a “controlled environment” where “you have to say all the right shit.”

Now that Johnson—who, for part of his career, was known as Chad Ochocinco—has been retired since 2011, he spends much of his time as a gamer or streaming on Twitch. He’s also an owner of a team in the Fan Controlled Football League (FCFL), and he thinks the league will find a fanbase because it will be everything the NFL is not.

Players don’t have to hide their personalities behind the NFL shield. They won’t be stifled. Sure, they might not ever become the stars that the NFL regularly produces, but they also won’t be controlled. And, Ochocinco said, maybe the NFL can learn something from the FCFL.

“The NFL has to evolve,” Johnson said. “Everything I did was frowned upon … Everything in life evolves. Everything traditional gets old. We’re two steps ahead of the game with esports and the concept they came up with [for the FCFL]. That goes for the NBA, the NFL. That kind of authenticity connects with the fans.”

Johnson earlier this week was announced as a new team owner in the FCFL—which allows an organization’s fans to make coaching decisions, call real plays in a real game, and connect with players in a way that other professional leagues can’t or don’t want to provide. The move makes sense for Johnson: Connecting with fans online is what he’s been passionate about for more than a decade.

Johnson has long been fascinated by social media and how he can use it to build his brand and have fun with those who love him. When he played in Cincinnati, he often used Twitter to announce that he was going to the movies at a certain time and would buy tickets for anybody who showed up. He invites fans to dinner. More recently, he’s used social media to pay rent for a fan who was facing eviction and to wonder aloud about what was happening with his neighbor.

“FBI arrested my neighbor Roger before my morning jog,” Johnson tweeted on Jan. 25. “I’ve only seen shit like that in movies, crazy start to my Friday.”

FBI arrested my neighbor Roger before my morning jog, I’ve only seen shit like that in movies, crazy to start to my Friday

Johnson never stops hustling, either. Before Friday’s panel began in a crowded Austin hotel ballroom, Johnson took the microphone and said, “Does anybody have a phone? Can I ask you guys to do me a favor? Can you follow me on Twitter? I don’t have many followers.” (Actually, he has more than 3.3 million followers.)

FCFL officials think their league—which has a two-year agreement to stream their games on Twitch—can be transformative not just for esports, but for all sports.

Ariel Horn, who has helped make League of Legends a massive success in esports, said it simply: “Change is coming.”

Horn, who is working with the FCFL, said when he attends his child’s elementary school’s career day, he shows the children an esports video, and he asks who thinks it’s a sport. All the kids raise their hands, Horn said. Ten years ago, it would have possibly been an intense argument. Now, Horn said, it’s a consensus.

“It’s something new that hasn’t been done before,” Johnson said. “As a fan of the game now, I can sit there, but I can’t do anything about it, and I know all the answers on how to succeed. The fact other people will have a say in the outcome, it hasn’t been tapped into yet.”