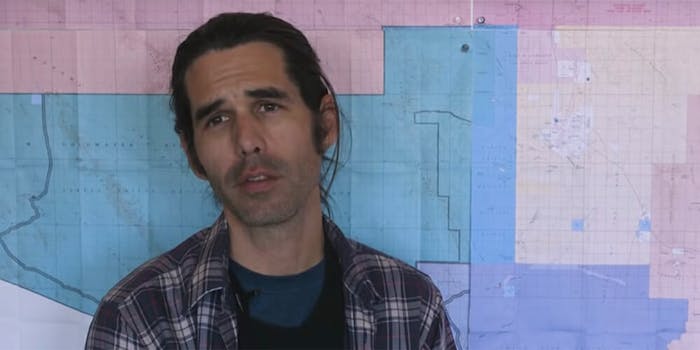 Scott Warren's trial was a landmark case for humanitarian aid.

Charged with providing food and water to migrants in an area of the desert that has claimed the lives of at least 32 so far, Arizona teacher and humanitarian Scott Warren will not be going to prison—at least not yet. Now, people familiar with the Bible are finding particular irony in a prosecutor’s statement during the trial.

Warren was charged with three felonies last year after helping two migrants who had crossed into Arizona from Central America. He faced 20 years in prison, and his case drew international interest as a landmark decision regarding volunteer aid on the U.S. border.

After 15 hours of deliberation, the jury failed to reach a verdict on June 11.

BREAKING: HUNG JURY in the #ScottWarren case. After 15+ hours of deliberation, a hung jury was officially declared, demonstrating that there are Arizonans standing their ground for justice and kindness in a historic moment.

Among the celebratory responses, Twitter user Ken Klipperstein pointed out that the accusations levied by the prosecution are almost word-for-word the instructions that were given to Christians in Matthew 25:35.

“He gave them food, he gave them water, he gave them a place to stay… He did a bad thing,” prosecutor Anna Wright said in her closing argument, according to advocacy group No More Deaths, which posted live updates from the trial.

During the trial of a man charged with aiding undocumented migrants, the prosecutor accused him of doing almost verbatim what the Bible calls on Christians to do pic.twitter.com/73xSMh1Y6u

The only real difference is that Wright tacked the rather weak judgment of “he did a bad thing” onto the list of Christian virtues.

THE WORDS ARE EVEN IN THE SAME ORDER, COME ON! https://t.co/5bvFGWilbo

She must have thought "This phrasing seems familiar for some reason… Welp, who knows. Let's go kick over some water jugs."

Some wondered if it was a deliberate attempt to sabotage the case given that prosecutors generally have to work the cases they’re given, whether or not they agree with them.

Could it be intentional? Obliquely sabotaging the case?

Perhaps she was actually trying to quietly help him without anyone being able to accuse her of not doing her job.

But a woman who says she was a witness to the trail thinks otherwise.

“The prosecutor read her script fairly well, but stumbled over her words during questioning,” the witness, Jennifer Bennett Powers, tweeted. “She definitely wanted to win the case.”

I sat in the courtroom during this trial. The prosecutor read her script fairly well, but stumbled over her words during questioning. She most definitely wanted to win the case.

People were pointing out that Jesus himself was born to desperate migrants.

But what did Jesus' family know about fleeing to a foreign country for safety, anyway? pic.twitter.com/AFp1GWX4co

Commenters also noted the irony of the court requiring Warren to swear on the Bible before attempting to prosecute him for obeying it.

Did they make him put his hand on the bible, before condemning him with the bible's own words, for doing the bible's own deeds? I am endlessly fascinated with all this bible-stuff, it's impossible to guess what might occur next!