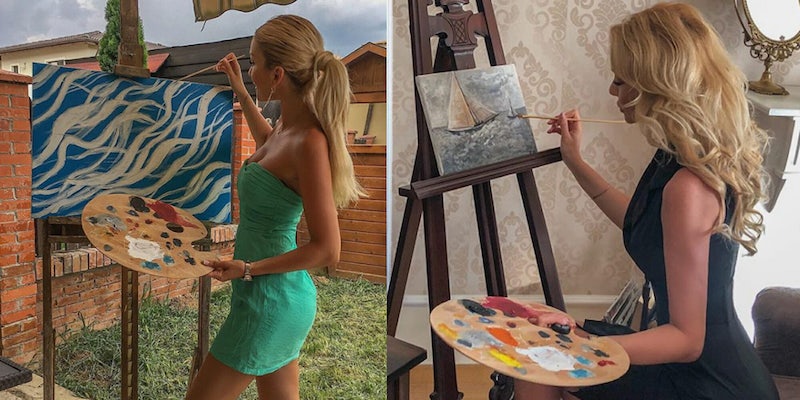 Why doesn't the pallet change?

Romanian painter and model Cristina Szeifert is defending the authenticity of her artwork in the face of accusations that her photos are too polished to be real.

The Instagrammer’s page, which has 33,000 followers, is full of photos of her completed works. But the 38-year-old came under fire this week after a Reddit post pointed out her unchanging paint pallet. Users noted that the pallet in Szeifert’s hand always has the same paint smears, indicating that the paintings are not actually completed by her.

The Reddit post shows three of Szeifert’s painting pictures alongside one another. In all three, the model is seated next to the completed work with a dirty wooden pallet in one hand. As the Reddit user notes, the pallet in the photos never changes. The paint smeared across its surface looks the same, even though each picture has different color schemes.

This artist frequently posts pics of herself "painting," but the paint palette never changes from Instagramreality

People inspected every detail in the photos, from Szeifert’s spotless attire to the expensive looking rug beneath her easel. While many picked apart Szeifert’s clean brush, incorrectly-held pallet, and spotless environment, others defended the artist. They said that as long as the art was actually created by Szeifert, it doesn’t matter that she chooses to wash and change before snapping a shot for her ‘gram.

In an interview with the Daily Dot, Szeifert confirmed “100% that all the paintings are made by me.” She said that she does often—but not always—use the same pallet to paint. She also addressed her consistently clean appearance. “I like to picture my self perfect, so obviously the pictures with my paintings were done with clean clothes and with my make-up done,” she said.

Following the criticism, Szeifert uploaded several videos of her process to her Instagram story, showing herself creating the paintings.

Some people on Reddit doubted the authenticity of Szeifert’s work due to evidence of Photoshop. While she admitted that she does occasionally edit her photos, Szeifert insists that the artwork is real and created by her.

The young model said she was shocked by the negative reactions. She said that she uses plenty of other pallets to create her art but often takes photos with the same one due to its “professional” look.

“I posted my art pictures trying to motivate the people to follow them dreams and don’t abandon them passions (sic) as I do,” Szeifert said. “I never expected that people could be so irritated coz of my clean look.”

She added: “I think creativity shouldn’t be discriminatory and everyone should do what they want to create beautiful things in the world.”