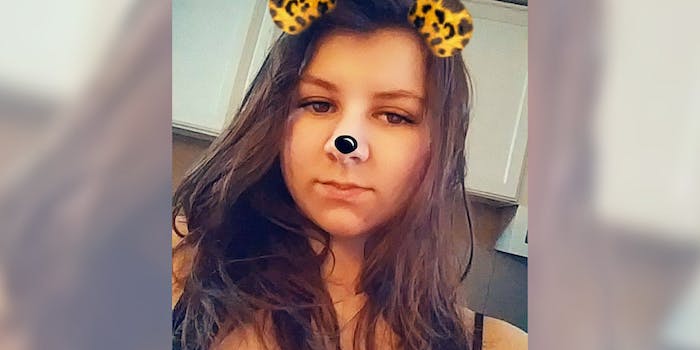 The man claiming to be a millionaire was catfishing.

A teen in Anchorage, Alaska, has confessed to killing her best friend after she was promised $9 million to do so by a man she met online, BuzzFeed News reports.

Denali Brehmer, 18, allegedly shot and killed 19-year-old Cynthia Hoffman on June 2. A man named Darin Schilmiller told Brehmer that he was a millionaire named Tyler from Kansas and engaged in an online relationship with her.

Brehmer and Schilmiller, who is actually a 21-year-old from New Salisbury, Indiana, extensively discussed over long text messages their plans to “rape and murder someone in Alaska,” according to cellphone records analyzed by authorities.

Schilmiller reportedly offered Brehmer $9 million to commit the murder and send him video footage of it.

Brehmer worked with four other friends to help her, including Caleb Leyland, 19, and Kayden McIntosh, 16. On June 2, they took Hoffman to a local trail for a hike and then duct taped her, and Brehmer shot her in the head. Detectives have told KTUU that Leyland also sexually assaulted Hoffman.

Leyland, along with another juvenile male and juvenile female that Brehmer named during questioning, were detained for questioning on Saturday, according to KTUU.

Schilmiller confessed to adopting the identity of “Tyler” with Brehmer. He told authorities that he planned the killing with her for three weeks and received a live feed from her as the killing went on. He has also confessed to planning another killing and for blackmailing Brehmer into raping others, according to BuzzFeed.

This is not the first time that teens have been inspired by content online, whether myths or people, to commit murder. In 2014, two 12-year-olds brutally attacked their friend in Wisconsin and said “Slender Man”—an internet horror character—told them to commit murder.

Brehmer reportedly expressed remorse about her actions during her arraignment on Saturday. “I know I did something wrong and I know I could have probably done something different if I was able to and I don’t want my daughter knowing that her mom grew up a killer because I don’t see myself as one,” she said, according to KTUU.

Leyland, along with the other two juveniles, have been charged for Hoffman’s murder. Brehmer was arrested and charged on June 4.