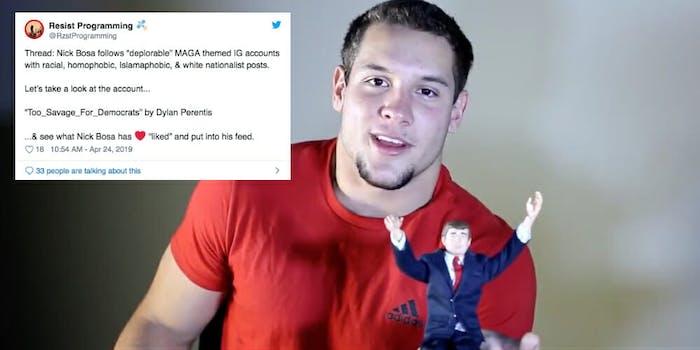 Former Ohio State star Nick Bosa had to have his social media scrubbed of any and all problematic material before Thursday’s NFL Draft. Now Bosa is under fire again for his problematic social media activity—this time for liking racist and homophobic Instagram posts, according to For the Win.

Twitter user @RzstProgramming has been following Bosa’s social media activity since March and documenting it all in threads—with receipts. There was actually so much problematic material that the Twitter account had to post a thread of several threads.

In the latest development, Bosa liked a friend’s photo on social media, who posted it with the hashtag N-word.

It’s been discovered that Bosa liked another Instagram post with the same hashtag, along with another one: “rape and pillage.”

…& see what Nick Bosa has ❤️ “liked” and is consuming on social media. pic.twitter.com/jRhcsIb5Bp

This week: Nick Bosa told ESPN he is laying low on the MAGA wagon ahead of the #NFLDraft2019…

Nick Bosa: I think it is a good idea to follow Tomi. pic.twitter.com/SjLhcOIxji

Before the draft, Bosa said his agents went through and scrubbed his Twitter account of “anything that would cause controversy.”

On Twitter, Bosa was hating on Colin Kaepernick, Beyoncé, Marvel’s Black Panther, and promoting President Donald Trump before the scrub.

@RzstProgramming made threads on the subjects of “Kaepernick,” “Beyoncé,” “identity/racial themes,” “MAGA” to expose Bosa’s behavior.

In the Kaepernick thread, Bosa called Kaepernick a “clown,” and wrote, “Taking a knee on 9/11… shame.” He also liked and retweeted several derogatory comments about Kaepernick. Overall, Bosa had nine different Twitter activities that were deleted regarding Kaepernick.

In the Beyoncé thread, Bosa wrote that “Beyoncé’s music is complete trash,” and that Lemonade was the “worst song (he) has ever heard,” even though Beyoncé doesn’t have a song called Lemonade.

He said in a video interview that he is not a fan of Beyoncé because he doesn’t like that “she has to make everything such a big, political statement.” He then said he was a “big fan” of Trump. Overall, Bosa had three different Twitter activities that were deleted regarding Beyoncé.

Does Beyhive have potential #1 NFL Draft Pick #NickBosa, who recently appeared at the #NFLCombine19, on their radar?

He says that Beyoncé’s music is trash & liked a comment that Beyonce and JayZ are trash. https://t.co/GyjXc6VMf5

VIDEO: Nick Bosa confirms he doesn’t like Beyoncé and is a big fan of Trump. pic.twitter.com/t3Nfusrl6I

In the MAGA thread, Bosa had at least 31 Twitter activities that were deleted regarding Trump and other political beliefs.

Bosa liked tweets that mention prominent Black men who were killed by the police, like Michael Brown, Eric Garner, and Freddie Gray. He liked several tweets where his white friends said the N-word. He also interacted with several right-wing figures.

He retweeted a tweet that called Obama a “bitch.” He tweeted that “Dwayne Wade looks like a parrot fish” and “I really don’t want to see Michael Sam kiss his boyfriend.. ew.” He also liked several other homophobic Tweets.

He also liked a tweet saying Black Panther wasn’t a good movie and not to make the argument about whether or not it was a good movie a “race thing.” In total, there were 27 Twitter activities regarding race and identity that have been deleted.

@RzstProgramming was ultimately blocked by Bosa.

Must have been something I tweeted…

At least #NickBosa got to showcase some of his blocking skills on #NFLCombine weekend.

Let’s get back to it… pic.twitter.com/u5QjKzGblL

The behavior also seems to run in the family because the Twitter account also made threads exposing the rest of the Bosa family, including his father, brother, and even his mom.

The tweets clearly did not affect Bosa’s draft stock. He was selected by the San Francisco 49ers with the second overall pick.

H/T For The Win