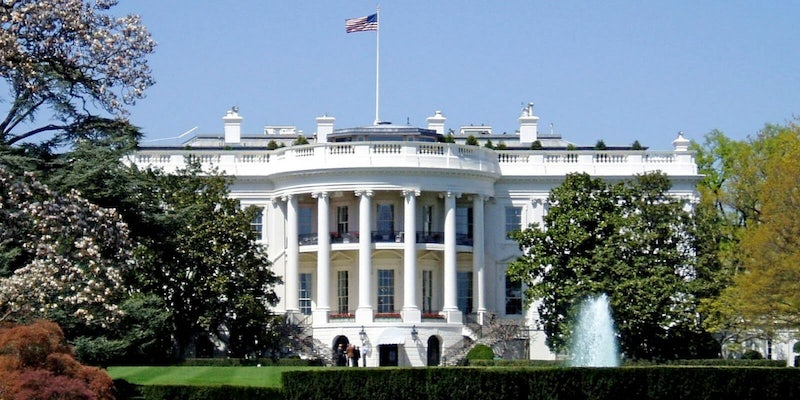 Trump complains about his Twitter follower count to Jack Dorsey

Trump met with the Twitter CEO in the White House.

Twitter CEO Jack Dorsey met with President Donald Trump on Tuesday for a discussion at the White House that reportedly centered around Trump’s follower count. The meeting, first revealed by Motherboard, was confirmed late Tuesday by the command-in-chief in a post on Twitter.

Trump tweeted that numerous topics were discussed, including “the world of social media in general.”

Great meeting this afternoon at the @WhiteHouse with @Jack from @Twitter. Lots of subjects discussed regarding their platform, and the world of social media in general. Look forward to keeping an open dialogue! pic.twitter.com/QnZi579eFb

Internal Twitter emails provided to Motherboard by two independent sources stated that the White House made the decision to invite Dorsey and other company executives.

Vijaya Gadde, Twitter’s global lead for legal, policy, and trust and safety, speculated before the meeting that it would surround “the health of the public conversation” on the platform.

Dorsey also appeared in the email thread in what may have been an attempt to quell potential backlash from employees.

“Some of you will be very supportive of our meeting [with] the president, and some of you might feel we shouldn’t take this meeting at all,” Dorsey writes. “In the end, I believe it’s important to meet heads of state in order to listen, share our principles and our ideas.”

The Twitter CEO continued by highlighting his personal belief of best policies for the social media site.

“As you know, I believe that conversation, not silence, bridges gaps and drives towards solutions,” Dorsey said. “I have met with every world leader who has extended an invitation to me, and I believe the discussions have been productive, and the outcomes meaningful.”

The meeting came about after allegations from conservatives that social media sites have a bias against them. A statement from Twitter to CNN provided a vague explanation for the meeting that included “the opioid crisis.”

“Jack had a constructive meeting with the President of the United States today at the president’s invitation,” Twitter’s statement said. “They discussed Twitter’s commitment to protecting the health of the public conversation ahead of the 2020 U.S. elections and efforts underway to respond to the opioid crisis.”

According to the Washington Post, however, Trump spent much of the meeting bemoaning his follower count.

“A significant portion of the meeting focused on Trump’s concerns that Twitter quietly, and deliberately, had removed some of his followers, according to a person with direct knowledge of the conversation who requested anonymity because it was private,” the article states. “Trump said he had heard from fellow conservatives who had lost followers as well.”

Trump accused the social media site earlier that morning of being “discriminatory” against its right-leaning users.

…..But should be much higher than that if Twitter wasn’t playing their political games. No wonder Congress wants to get involved – and they should. Must be more, and fairer, companies to get out the WORD!

The president made similar remarks during a joint press conference with Brazilian leader Jair Bolsonaro in March.

“Things are happening, names are taken off, people aren’t getting through,” Trump said at the time.