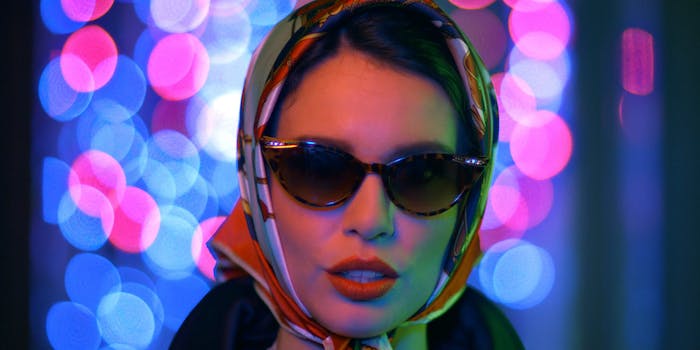 In documentary ‘Modern Whore,’ a former escort takes control of her own narrative

The woman at the heart of the film explains why 'sex workers are the best storytellers.'

In a stark, dark hallway, Mary Ann struts in cherry red stilettos, heading to her next appointment. A silk scarf and chic, cat-eye sunglasses shield her from the possibility of discovery as she knocks on her client’s door.

“She’s a hooker with a heart of gold, a real pretty woman,” an unidentified narrator says as a retro soundtrack backs the opening scene, offering a nod to exploitation films from the ’70s.

It’s an opening scene bristling with glamour and playful intensity, giving viewers a dramatized glimpse into what used to be the everyday work life of former escort Andrea Werhun.

In the upcoming documentary, Modern Whore, Werhun depicts her alter ego “Mary Ann,” the real-life alias she employed during her days as a “university student by day” and “escort by night.”

Blending reverie with the unvarnished reality of life as a sex worker, the Canadian documentary, directed by Nicole Bazuin, immerses viewers into Mary Ann’s world through transparent interviews and colorful vignettes.

Set to premiere next month, the documentary comes at a time where sex workers are dominating political and social spaces demanding their work to be decriminalized. Recently, the Daily Dot reported that over half of Americans are for the decriminalization of sex work.

“For me, sex workers are the best storytellers,” Werhun said. “They can spin yarn like you wouldn’t believe.”

Modern Whore is based on Werhun’s debut memoir of the same name and details Werhun’s discovery of escort review boards where clients rate and review workers’ sexual performance. The memoir, which Bazuin also collaborated on, served as a launching pad for the film after the co-creators saw how intrigued audiences were about review board culture, Bazuin said.

“I found out about escort review culture from my madame,” Werhun told the Daily Dot. “Obviously, I was extremely curious what this man, who had known me and had sex with me over the span of an hour, had to say about my sexual performance.”

In the film, Mary Ann takes viewers into the escapades described by online “hobbyists,” or men who take part in escort review culture. Scenes delve into the sides of truth and fantasy present within escort reviews that, although sometimes lending themselves to humor, showcase the very real predatory and dangerous threats sex workers encounter.

Bazuin said the inspiration for the memoir spilled over into the film version, and that the visuals employ “sumptuous” aesthetics with the mindset of “What if Playboy was run by the bunnies themselves?”

“Picture classic exploitation films as an example of a way a marginalized group may be exploited for the entertainment of a greater mass audience,” Bazuin told the Daily Dot.

Modern Whore opts out of relying on the purely “he said, she said” narrative and puts Werhun in charge.

“The importance of putting a sex worker at the forefront of her own story means that other sex workers will be able to bear witness to a sex worker unabashedly telling her own story and feel like, ‘Maybe it’s time for me to tell my story,’” Werhun said.

Despite the visibility given to survivors of sexual assault and harassment due to the  “Me Too” movement, led by founder Tarana Burke, Werhun said the movement hasn’t fully reached the sex work industry.

“The way the laws are, [sex workers] haven’t had our Me Too moment,” Werhun said. “We haven’t been able to have our workplace respected as a legitimate workplace.”

Werhun, who is based in Toronto, said “technically speaking, there’s no legal way to engage in sex work” in Canada due to a 2014 law known as Bill C-36. The bill makes it a crime to buy sex.

Meanwhile, in the U.S. the 2018 SESTA-FOSTA law attempts to curtail sex trafficking online and give authorities the power to monitor websites where third parties are found to be soliciting sex work, according to Vox. However, sex worker advocates believe the legislation’s consequences are detrimental to those who use websites to safely solicit sex work.

At a time when public support for the decriminalization of sex work in the U.S. is at an all-time high, Werhun said she thinks viewers unfamiliar with the industry will be surprised as to how much they relate to sex workers.

“Sex work is flexible, well-paying work,” Werhun said. “It affords freedoms that most other jobs can’t. And at this point when everyone is struggling to gain full-time employment, I think our issues are incredibly relatable.”

On March 3, Werhun and Bazuin will launch their Kickstarter for the second edition of Modern Whore: The Memoir, which includes Werhun’s experience as a stripper for three years.

“I have new stories to add,” Werhun said.

For Werhun, the chance to bring her experience to the big screen is not one she takes lightly, she said, especially since it’s a rare possibility for others.

“There are so many sex workers living in silence, living in shame isolation, because they know that if they tell their story they are likely to be disowned, they’re likely to be discriminated against (or) their relationships might fall apart,” Werhun said. “I have the privilege of being able to tell my story, and I’m going to take that as far as I can.”