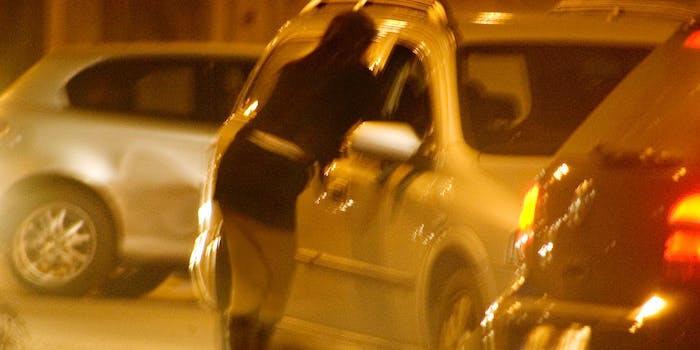 On Wednesday, the Canadian government introduced Bill C-36, a piece of legislation that, if passed, would make it illegal to buy sex in Canada.

Under the proposed bill, buying sex would be a criminal offense, as would the selling of sex in public areas where minors could “reasonably be expected to be present.” The advertising of sexual services, either online or in print, would be punishable by up to five years in prison. The bill also provides $20 million in government funding for “exit” services for sex workers who wish to leave the profession.

Passage of the bill, says Justice Minister Peter MacKay, would mark the first time that buying sex has been criminalized in Canada, where the commercial exchange of sex between consenting adults is currently legal. It’s being touted by MacKay and other Conservatives as Canada’s answer to the “Nordic model,” a term used to describe the prostitution laws in Scandinavian countries that target johns rather than sex workers themselves.

The reasoning behind this, says MacKay, is to curb prostitution by targeting the pimps and “perverts” who buy or directly profit from the selling of sex. He sees the bill is an attempt to “protect” sex workers, the majority of which, he says, are not selling sex of their own volition.

Needless to say, sex workers and their advocates are not happy with C-36, nor are they pleased with the Canadian government’s suggestion that women who sell sex are “victims.” Over the past 24 hours, many have taken to Twitter to protest against the bill’s vague and abstruse language, which they argue further endangers the sex workers the bill ostensibly aims to protect.

Nothing but contempt from @MinPeterMacKay yesterday. Contempt for #sexwork, the Charter, the SCC, and the people of Canada. #cdnpoli

The more I read about #BillC36, the more it seems a shift towards US style criminalization than the Swedish Model.

I like to think we are resilient as fuck, but the sad hard truth, is that sex workers are going to die because of this new law #cdnpoli

You are criminalized on the street and if you advertise, so what sex workers does that leave? 2/2/ #cdnpoli #sexwork

Those opposed to the bill argue that it’s not so much the Canadian counterpart to the Nordic model as it is the Nordic model’s “tougher, bigger, badder cousin,” as one Canadian described it on Twitter. They’re concerned that by criminalizing the purchase of sex, the selling of sex in public areas, and the advertising of “sexual services,” the government is effectively driving sex workers further underground, thus putting them at greater risk.

“As usual, these laws will have a lot worse effect on street workers than on indoor [sex workers],” Maggie McNeill, a former sex worker and author of the blog the Honest Courtesan, told the Daily Dot via e-mail. “They’ll be forced into more dangerous industrial areas away from homes and light.”

The provision of the bill prohibiting the “advertising of sexual services” is particularly disconcerting for this reason, experts say.

“This is an entirely new provision that attempts to radically change the sex trade in Canada,” Peter Wrinch, the executive director of Pivot Legal Society, wrote in a blog post on the bill. “Without the ability to advertise in newspapers, online, or other forms of media, sex workers will now have severely limited means for working safely indoors. … [T]he ability to operate in safer indoor venues is a key measure for sex workers to reduce their risks.”

“There isn’t a lot of judicial review on what [‘sexual services’] actually means,” says Nikki Thomas, an escort and former executive director of the Sex Professionals of Canada (SPOC). “Now, it might be illegal for a strip club owner to have a sign saying ‘Nude Girls Inside,’ because that might be advertising ‘sexual services.'” The clause also might encompass the production of pornography, says Thomas: “It’s a vague and uncertain term.”

Despite sex workers’ outrage surrounding CB 36, however, the majority view seems to be that the bill, if passed, will be ruled unconstitutional and struck down due to its similarities to anti-prostitution legislation that was struck down by the Supreme Court last year.

“In the long run, this act is DOA and the government knows it; it violates every single principle of Bedford [Canada Attorney General v. Bedford, the 2013 Supreme Court ruling against a ban on brothels] and therefore cannot withstand a challenge,” McNeill says.

Thomas agrees. “There’s no hope of any of this actually passing a constitutional challenge,” she says. “The problem is for the number of years that it takes to get to the Supreme Court, these laws might still be on the books.” Ultimately, she sees the bill as a way for Conservative politicians to appeal to far-right party members by pretending “to be tough on crime while not doing anything to change the status quo. Except maybe making things more dangerous for sex workers in the foreseeable future.”

But even if the bill is challenged in court, as many believe it will be—again, assuming it passes and becomes law—the demonstrated lack of concern for the welfare of women who sell sex (not to mention the lack of input the bill’s authors had from sex workers, who’d ostensibly be affected most by the bill) is particularly stunning. Of course, politicians’ apathy toward the well-being of sex workers, cloaked in the guise of wanting to “help” or “rescue” them, is not a new phenomenon. But that doesn’t make it any less disturbing.