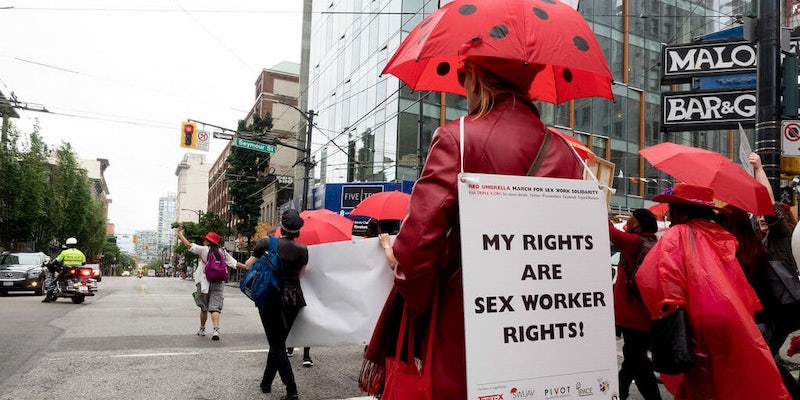 The way to curb trafficking isn't by putting more girls on the streets.

In a rare instance of bipartisan agreement, the U.S. House of Representatives passed a measure this week that it purports will protect sex workers from traffickers. Sex workers, however, expect it will do precisely the opposite—close the few doors trafficking victims have to get help.

The Allow States and Victims to Fight Online Sex Trafficking (FOSTA) bill mirrors the Stop Enabling Sex Traffickers Act (SESTA) the Senate passed in November, and similarly amends the Communications Decency Act to pin legal responsibility on websites where sex work is discussed and sex trafficking occurs. That would make it easier for victims to press charges against platforms like Backpage.com, a classifieds site that helps workers advertise to, find, and vet clients. Or so runs the House’s reasoning.

On its face, fighting sex trafficking—by the government’s own definition, necessitates “force, fraud, or coercion” by a third party for material gain—is an eminently worthwhile cause. But as ThinkProgress reports, the legislation treats sex work, itself a large umbrella term, as if it were always the product of threats and intimidation. It perpetuates the flawed idea that wherever people voluntarily exchange sex for money, they create a demand for a service that in turn enables trafficking. According to Kristen DiAngelo—executive director of the Sex Workers Outreach Project (SWOP) Sacramento and a former sex worker who was a trafficking victim for nearly a decade—that’s not the way things work.

“I understand that very well-meaning people … want to help, but I also understand that they don’t know anything about our lives and what we live through,” DiAngelo tells the Daily Dot.

In her 40 years of involvement with the industry—formerly as a trafficking victim, a consensual sex worker, and currently as an advocate and outreach provider—DiAngelo has seen many similar efforts by the government and law enforcement to crack down on the establishments and platforms sex workers use to secure clients. Every time, she explains, the end result is the same.

Finding work from an ad posted on the internet means there’s a documented trail linking a sex worker and the client; it means the sex worker has the time to do due diligence, checking in with the client’s references and consulting a community of peers to determine whether or not this person is safe. When those sites shut down, as they periodically do, sex workers look elsewhere for clients—most often, on the street.

Take, for example, the site RedBook. Between 1999 and 2014, when the FBI and Justice Department shut it down, RedBook provided an affordable place for sex workers to advertise online. It also offered message boards where sex workers could swap information about bad dates. So when the government abruptly seized its domain, users were left without recourse. DiAngelo estimates that “everyday, on that site, over 10,000 workers in California posted ads,” and when those workers found themselves suddenly without a reliable income source, many opted for a street corner. SWOP Sacramento did a needs analysis in 2015 and found an 18 percent upswing in street work in just that city alone. The average cost of services also plummeted, obligating workers to take on more clients to meet their financial needs. The surge in sex workers on the streets also correlated with more unprotected sex because, as SWOP’s survey put it, “condom use becomes negotiable” in a more competitive market. A sex worker who insists on a condom may well lose clients to a sex worker who doesn’t, jeopardizing their sexual health.

In this vein, the greatest problem with forcing sex workers off the internet and onto the street is safety. Research suggests sex workers run an elevated risk of violence on the street, an idea DiAngelo confirms. “When you’re on a street corner, everyone’s scared about being stopped and whatever you do is visible to everyone else,” she explains.

Fearful of arrest, sex workers move off main streets and into areas where they’re more difficult to spot. Under pressure to make money, they have less time to assess the situation at hand, leaving them vulnerable to violent predators and, indeed, traffickers with a penchant for exploiting people in desperate situations. When sites like RedBook and Backpage shut down, “the life of the trafficker does not change at all,” DiAngelo says. “They still have their product, which is the victim.”

Granted, sex trafficking does happen on Backpage: An investigation by a Senate subcommittee (which ultimately led to the removal of Backpage’s adult ads in 2017) determined that the site was involved in 73 percent of “all child trafficking reports that the National Center for Missing and Exploited Children (NCMEC) receives from the general public.” But as DiAngelo points out, a trafficker doesn’t just let a sex worker go when one platform falls; the trafficker just makes their victim work elsewhere, often in an environment that puts victims at an elevated risk for bodily harm.

This might be the point at which skeptical readers wonder why a person who’s being abused wouldn’t just go to the police. People who have been raped or sexual assaulted often keep quiet because they fear authorities won’t believe them. Because of the stigmatized nature of their jobs, sex workers have arguably more reason to suspect police won’t take their claims seriously, but they also risk imprisonment because prostitution remains a crime in nearly every U.S. county. Even people who have been sold into the sex trade can wind up behind bars on a prostitution conviction.

There’s also the prospect of sexual abuse at law enforcement’s hands. DiAngelo recalled multiple instances of rape and extortion by police officers, and added that roughly a quarter of the sex workers she surveyed in 2015 identified as victims of the authorities. Those who lacked personal experience in that department had certainly heard stories from their peers. Taken together, the current system leaves sex workers with few outlets to call for help when they’re abused and traps trafficking victims.

If lawmakers really want to protect sex trafficking victims, many advocates say they should start with decriminalizing sex work.

“Sex trafficking is a symptom of the criminalization and the stigma that keeps people in the sex industry vulnerable, regardless of how they got there,” Siouxsie Q, an author, politician, and sex worker, tells the Daily Dot. “Once you decriminalize the workers, you decriminalize the victims, and you disable the power of the abuser.”

Not every sex worker is a victim, obviously. Many sex workers are in the business voluntarily, and much of the sex they have is consensual. Not every sex act they perform and not every client will meet that mark, though, especially if the government hobbles their ability to share intel online. Placing the information that enables a worker to give consent to a client out of reach at the moment that worker needs it risks making many more sex workers victims of violence.

Widely euphemized as the world’s oldest job, sex work isn’t going anywhere. Keeping it criminal, and then heaping stigma on the trade with measures like FOSTA and SESTA, cultivates a landscape in which sexual exploitation thrives.

“You can go at it as hard as you want from any other angle,” Siouxsie says, “but until a victim, a child, can pick up the phone and be sure that they’re going to be actually OK, and not incarcerated, not further harassed, and not facing a charge that’s going to haunt them for the rest of their lives, then we’re just kidding ourselves. We’re not fighting trafficking.”