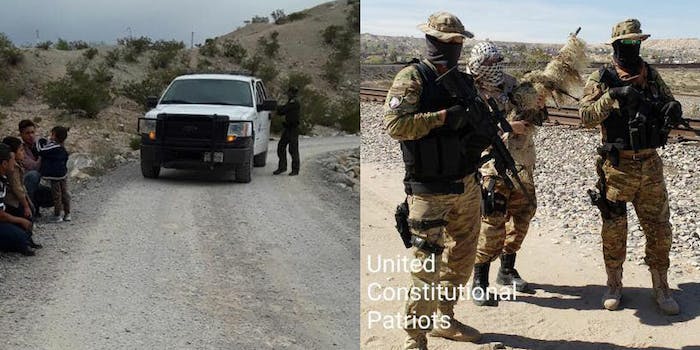 A militia group that’s been camping on the southern border of the U.S. to intimidate and harass migrants, many of them children, from entering the country has been cut off from its crowdfunding efforts.

United Constitutional Patriots (UCP), the militia group, has reportedly been patrolling the borders in New Mexico, and since November and has since detained 3,000 migrants without legal authority.

Many of these arrests are documented on social media with members posting live videos of detaining and humiliating migrants at the border, often with live commentary. The videos attract xenophobic and white supremacist comments, with many expressing their glee and joy of watching the migrants be sent to Mexican border patrol.

The group was reportedly functioning by raising funds online, and PayPal and GoFundMe have since suspended their accounts. The GoFundMe page for UCP was not available when the Daily Dot ran a search on Saturday morning.

As a GoFundMe spokesperson told the Daily Dot: “This campaign was removed from the platform because it was found to be in violation of GoFundMe terms and conditions.”

A PayPal spokesperson did tell BuzzFeed News: “We do not allow PayPal services to be used to promote hate, violence, or other forms of intolerance that is discriminatory.”

On Thursday, the American Civil Liberties Union (ACLU) issued a statement about nearly 300 migrants the group detained on Tuesday.

“The vigilante members of the organization, including Jim Benvie, who posted videos and photographs[2] of the unlawful arrests to social media, are not police or law enforcement and they have no authority under New Mexico or federal law to detain or arrest migrants in the United States,” read the statement. “Their actions undermine the legitimate efforts of our state’s law enforcement officials to keep New Mexico families safe and they erode community trust.”

Apparently, since the closing of the accounts, members have received a lot of “support” from their followers.

A man under the name of Chuck Davis wrote on the Facebook group Saturday morning: “We are receiving wall to wall phone calls from people waiting to help,either with donations or boots on the ground.”

The group had 3,050 members as of Saturday morning.