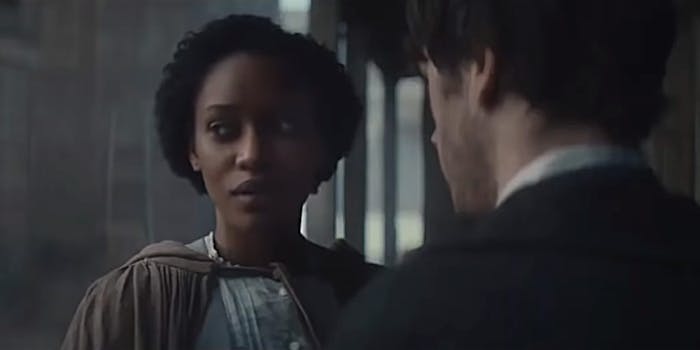 The site has pulled the ad, but not before insulting all Black Americans.

After swift and righteous backlash, genealogical site Ancestry.com has removed a controversial ad that trivializes slavery.

The ad, titled “Inseparable,” shows a white man promising his lover Abigail, a Black female slave, a better future if they ran away to the North. “There’s a place we can be together, across the border,” he says, while she nervously considers. “Will you leave with me?”

The ad fades, and the writing appears, “Without you, the story stops here.” A narrator is then heard saying, “Uncover the lost chapters of your family history with Ancestry.”

Abigail’s role appears to be consensual and that of a partner who is treated as an equal, which is outright disrespectful to all Black Americans for its whitewashing and rose-tinting of the history of slavery, in which Black women were owned and raped, not wooed and cajoled into “escaping to the North” with romantic promises.

While it’s true that 1 in 4 black folks who test their male line through DNA end up finding a white man, it ain’t because of no damn slavery love story. I’m so tired of y’all. https://t.co/UwknpDDniL

The fixation with interracial couplings as a means of transcending structural racism is anti-Black. It's rooted in a fascination with crossing the socially constructed "color line", something that can't be accomplished unless someone passes for other-than-Black identity. 2/

The ad, which reportedly went up on April 2 and was taken down by Thursday, hit a 400-year-old wound for many. “This commercial spits on the trauma in our veins and the fight of our ancestors,” Brittany Packnett wrote.

Hey, @Ancestry, neat commercial. Now do one about the time I used your site and found the names of the people my great-great-great-grandfather enslaved. https://t.co/zbHiReD050

One of about 1,000 awful things about this commercial is it ignores the fact that for black Americans – myself included – and for others in the diaspora, DNA and documentary ancestry information is as painful and traumatic as it is illuminating. These are not love stories. https://t.co/tuTpHwmnGk

I used this service a few years ago. And when I realized I was more than 10% European, I wept.

Not from shame for who I am, but from anger from the trauma of how it may have come to be.

This commercial spits on the trauma in our veins and the fight of our ancestors, @ancestry https://t.co/KBpqB6XPZg

Many commented about how this narrative fits in line with America’s longstanding pattern of white heroes and the erasure of the Black perspective. “Light skinned babies didn’t come from freedom fighting whites,” Ashton Womack wrote. “They came from rape.”

there were clearly no history books at this marketing meeting

In case you’ve never heard of how blindingly white ad agencies are, here’s an example (but good god https://t.co/AsfNcQiNsG you’re trying to sell your authenticity at history so you’d better make sure your ad gets history right and ever bit of this is wrong!) https://t.co/zcGGFpf2pM

Lol they don’t show WHO they’re running from, they dismiss so much about slavery and in the end still make the white man a hero. Light skinned babies didn’t come from freedom fighting whites. They came from rape.

Some felt this was a glaring reflection of the lack of diversity at Ancestry.com, in that such an ad could only appear cute to people who can afford to have little context of the history of chattel slavery.

And if this is the case then it is clear that @Ancestry is lacking in diversity in their marketing department. No person of color would have ever approved this commercial. https://t.co/rUYup21kUj

That ancestry commercial is the perfect example of how important diversity is in any workplace. You're telling me in not ONE PERSON was in that boardroom meeting like: pic.twitter.com/suMXvfFH06

And some didn’t pass up the opportunity to take a dig at Ancestry’s audacity of making this commercial.

Rosa parks: why not?

White man: because you already have a place……in my heart.

*ancestry dot com logo with a soft fade out*

ancestry dot com: how can we overly romanticize & create an irresponsible, ahistorical depiction of the relationship between white men & black women during the period of chattel slavery that completely disregards its power dynamics & the trauma of sexual exploitation? https://t.co/s5BqnoSg9x

If they want to show the real way the site gets used, show a bunch of white people just praying they don’t find slaveholders and maybe two of them being happy.

Ancestry.com told the Daily Dot in an emailed statement that they are taking this “feedback.”

“Ancestry is committed to telling important stories from history. This ad was intended to represent one of those stories,” it said. “We very much appreciate the feedback we have received and apologize for any offense that the ad may have caused. We are in the process of pulling the ad from television and have removed it from YouTube.”

Perhaps the next step is re-examining what it means to be—and for whom it is—”the world’s largest online history resource.”