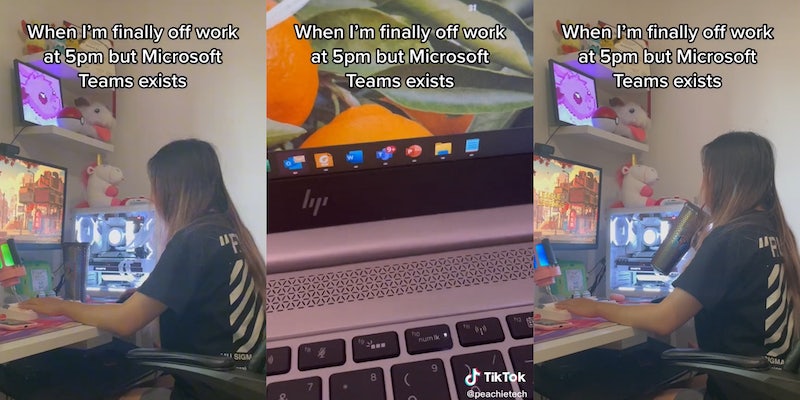 ‘No bc if I’m off work imma be off of work’: Remote worker’s video on hearing Microsoft Teams ping after 5pm sparks debate

'I get soooo nervous if I hear it go off after work.'

While many have enjoyed the numerous benefits of working from home, others have complaints.

Remote workers have gone viral for saying that working from home has made it more difficult to find a work-life balance, bosses have taken work-from-home as an excuse to violate workers’ boundaries, applications like Microsoft Teams monitor users too heavily, and more.

On the topic of work-life balance, another TikTok garnered considerable attention for her relatable video on it. User @peachietech joked about the emotions she feels hearing the Microsoft Teams “ping” after her workday is supposed to be over.

“This sound gives me worse ptsd than the missing ping,” she added in the description.

This sound gives me worse ptsd than the missing ping

In the comments section, users shared their own anxiety about the dreaded ping notification.

“I have a separate comp for work but when I hear it dinging in sleep mode… rage,” wrote a commenter.

“Omg I hear it in my nightmares,” a second user shared.

“I get soooo nervous if I hear it go off after work,” a third admitted.

Others stressed the importance of finding a balance between work life and personal life, advising TikTokers to set boundaries for themselves and not let their employers violate those boundaries.

“No bc if im off work imma be off of work,” explained a user.

“That’s why I close my computer and don’t turn it back on until I’m on the clock again,” another stated.

“I have a work phone and I say bye at exactly 5 and tell them I’m turning my phone off lol,” a further user detailed.

“That’s why my laptop shuts promptly at 5 pm and stays shut for the night,” an additional user agreed.

Microsoft Teams is used by over 270 million users, according to GeekWire. The business software, and others like it, has made it easier for remote workers to overwork while working from home. According to a study Timely pointed to, workers in the U.S. have worked “an extra three hours each day on average” during the pandemic.

We’ve reached out to @peachietech via email.