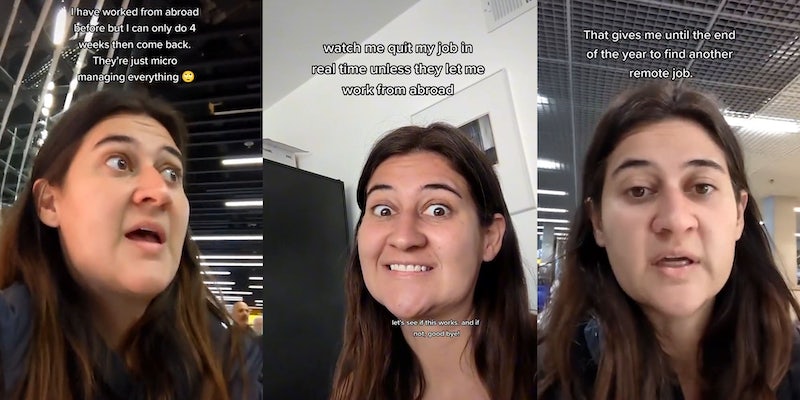 'The pandemic has revolutionized work. It's time to set boundaries.'

A TikToker sparked controversy last week after posting a video of herself threatening to leave her company if she is not allowed to travel abroad while working her remote job.

In the viral video, which has over 195,000 views and was posted by travel creator Sibu (@goglobalwithsibu), the TikToker films herself sending a risky email to her boss.

“Watch me quit my job in real-time unless they let me work from abroad. Let’s see if this works. And if not, goodbye!” the TikToker says.

“I’ve been remote for over a year now but with restrictions. I know what I need, and that is to leave the US. It’s the year 2022 and there are plenty of ways to make money online – the pandemic has revolutionized work. It’s time to set boundaries,” the TikToker captioned the video.

@goglobalwithsibu I’ve been remote for over a year now but with restrictions. I know what I need, and that is to leave the US. It’s the year 2022 and there are plenty of ways to make money online – the pandemic has revolutionized work. It’s time to set boundaries. where would from given the chance? #LENOVOJUSTBEYOU #remotework #solofemaletraveler #seetheworld #digitalnomad #longtermtravel #travelwithme #liferedefined #aroundtheworld ♬ original sound – goglobalwithsibu

The viral TikTok sparked debate in its comments section over the challenges and possibilities of traveling while working remotely. Some users criticized or questioned the TikToker for not mentioning the legal problems posed by working abroad, including paying taxes and securing tourist or work visas depending on the country one’s traveling to.

“Bro it’s not that they care where you actually work, it’s about the job costing and tax, it’s not exactly something they can bypass for exceptions,” one user complained.

“Have you researched all the tax implications and the legalities? I know there are sooo many rules when working abroad!” another user asked.

“I have! and I work for one of the biggest tech companies in the world. global offices. this working policy makes no sense…I’ve worked from abroad b4. you’re right, but not with my company. they’re just petty,” the TikToker responded.

Others cheered on the TikToker to explore other opportunities if this one doesn’t pull through.

“If not oh well ! There are plenty of ways now a days ! And you are so savvy ! You got this !” one user encouraged.

Over almost five days, users waited in anticipation to hear back from the TikToker about how her boss responded.

Finally, in a follow-up video posted monday, the TikToker says her job, unfortunately, did not allow her to travel permanently but offered her the option to travel until July, which she took.