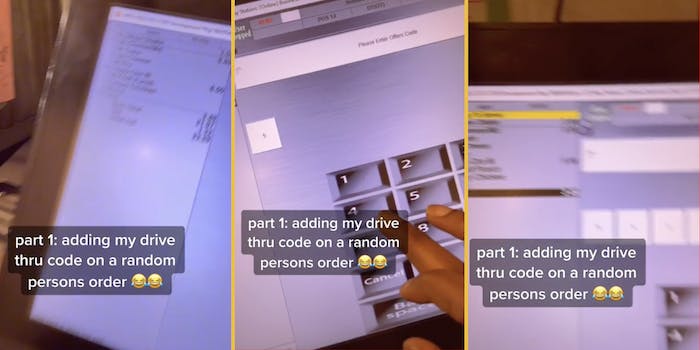 ‘How to get fired 101’: McDonald’s worker adds code on random customer’s order to get points for free food, sparking debate (updated)

'The job is temporary, points are forever.'

Update Jan. 5 2:15pm CT: TikToker @nnennaaaaa confirmed with the Daily Dot that the video “was all just jokes” and that she removed her code after filming the video.

Original story: In a viral TikTok video, a McDonald’s worker added her code on a random customer’s order in order to get points redeemable for free food. Many users in the comments warned against doing this, sparking debate over the consequences.

“The people that get it get it duh,” user @nnennaaaaa captioned the TikTok. The worker seemed to imply that the video was a joke, using hashtags like #comedy and #jokes.

The video shows the worker typing in her code on the POS system, and it received over 1.3 million views.

The user made two follow-up videos chronicling how many points she gained each day. She gained over 26,000 points on both days.

Some TikTok users in the comments showed support for the worker’s attempts to get free food.

“Only other minimum wage slaves get this,” one user said.

“The job is temporary, points are forever,” another said.

However, many others in the comments warned that the worker could lose their job as a result.

“This is immediate termination where I work lol,” another said.

Some users who claimed to do the same thing shared the consequences they faced.

“Don’t do it constantly because corporate is gonna send an automatic ‘fraud report’ to the store. I got caught … I had over 40k points,” one user said.

“I did this and now I have theft on my record,” said another.

However, others claimed they experienced minor consequences in comparison.

“Nah someone at my location did this and he didn’t get fired just got in trouble and they told him to stop doing it, he had like 60k points from it,” one user said.

“I used to work at McDonald’s and I did this everyday to get a free frappe and Big Mac,” another said.

“I always did this when I worked at McDonald’s never got caught for it,” said a third.

The Daily Dot reached out to McDonald’s via email.