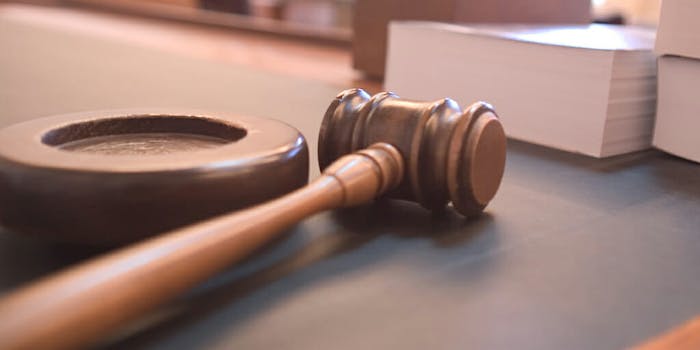 The photo shows 37 accused undocumented immigrants lined up in a courtroom.

A photograph leaked last week captured the jarring image of 37 defendants, shackled and clothed in orange prison jumpsuits, lined up shoulder-to-shoulder, awaiting their fate as part of a “mass trial” in a Pecos, Texas, courtroom. Although the image may seem startling to many, it’s a common scene in the U.S.’s crackdown on illegal immigration.

"Nathan, who has covered border and immigration for three decades, told https://t.co/S7GqCg1Rx5 that similar mass trials she attended recently in Brownsville and El Paso were some of the most upsetting things she's witnessed during her career." https://t.co/PlSopkj9HV pic.twitter.com/PPSZK72H0E

Accused of illegally crossing the border, the individuals were processed under Operation Streamline, a zero-tolerance prosecution system in which defendants in immigration cases are tried together in groups. The program was created in 2005 in response to an increase in the number of undocumented immigrants crossing the border and overcrowded immigration courts.

The viral image was taken illegally in the ceremonial courtroom at the Lucius D. Bunton Federal Courthouse in Pecos. Although mass trials occur regularly in civil immigration courts, this type of proceeding is not as common in federal courts.

Now, due to the “zero-tolerance” immigration policy implemented by President Donald Trump in May, officials are coming down even harder on individuals entering the border. Because the U.S. government will prosecute 100 percent of illegal entries, the increase in cases may lead to more mass trials, according to Cynthia López, an immigration lawyer in El Paso.

“Whenever you have mass trials, there’s a lot of issues with due process,” López said (under the law, even undocumented immigrants are granted due process).

Critics also assert that Operation Streamline delivers “assembly-line injustice” and makes it so that public defendants have very little time to deal with their dozens of clients. Debbie Nathan, a Texas journalist who was sent the leaked photo of the trial in Pecos, described in the Intercept trials where defendants had to answer a judge’s questions in unison or where lawyers had only a few minutes with each of the accused.

Critics also argue that the process wastes resources on the unnecessary criminalization of immigration.

“Some of the processing centers are like jails,” López said.

The zero-tolerance policy has even more serious consequences for families involved in these situations, even those fleeing violence. Typically, an undocumented immigrant caught crossing the border was released pending deportation proceedings and could stay with their family.

But under stricter rules, immigrant children must now be forcibly separated from their parents, a daunting policy in light of documents recently obtained by the American Civil Liberties Union showing alleged widespread mistreatment of detained child immigrants.