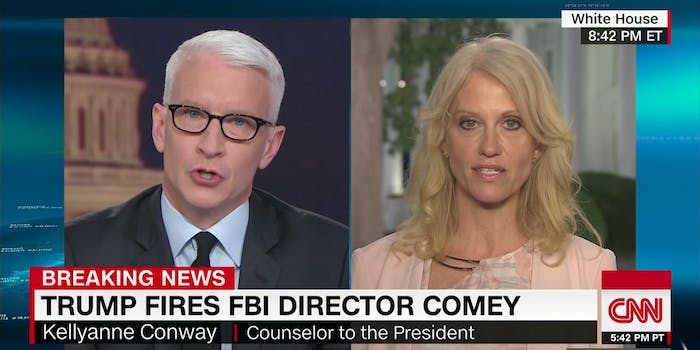 Conway sure does have a strange definition of sexism.

As the first woman to lead a successful presidential campaign, I am sure Kellyanne Conway has faced her unrelenting share of sexism from Republican chums and Democrat talking heads (this gross Fatal Attraction SNL sketch, included).

But this morning, Conway went on Fox & Friends and accused Anderson Cooper’s now-immortalized eye roll during a recent interview of having been an act of sexism. Which, by the textbook definition of sexism (“prejudice or discrimination based on sex; especially, discrimination against women”), it most certainly was not.

Speaking to the show hosts, Conway explained how she thanked Cooper for “the trip down memory” lane when he played clips of then-presidential candidate Trump commending (now recently fired) FBI Director James Comey for the way he handled re-opening the investigation into Hillary Clinton‘s emails, and that’s when he rolled his eyes at her.

Here’s the clip of that below:

Conway then continued to assert that Cooper’s reaction was out of sexism, not that she was being sarcastic, gloating, or diverting, like critics often point to her being, while repeating talking points that didn’t add up in explaining why Trump fired Comey earlier that day.

“Let me tell you something—Hillary Clinton is in search of sexism as a lame excuse for why her disastrous candidacy and campaign lost six months ago, I face sexism a lot of times when I show up to interviews like that,” Conway said on Fox & Friends.

But then, piggybacking off her sexism claim, Conway segued into asserting that Cooper’s reaction was that of some kind of “partisan-ism,” and said that not male, but female Democrats wouldn’t have received the same treatment.

“Could you imagine rolling your eyes—having a male anchor on a network roll eyes at Hillary Clinton, at somebody, a female representative, spokeswoman for President Obama or President Bill Clinton? I think not.”

For the record, partisanship has nothing to do with sexism—just watch these clips of male Fox News hosts, one of which Conway was speaking to (Brian Kilmeade), slinging sexist comments to women and female hosts on the right-leaning network. Last summer, former Fox personality Gretchen Carlson, who was a target of one of those insults in the video, filed a lawsuit against network founder Roger Ailes and Fox News, which launched an onslaught of subsequent harassment lawsuits against the network that led to the recent ousting of host Bill O’Reilly.

And yes, if we were to take Cooper’s eye roll at face value, a man rolling his eyes at a woman on live TV would absolutely look like a slight steeped in sexism. But, much like the backlash that Conway faced after being criticized for putting her feet up on a couch in the Oval Office, Cooper’s reaction did not happen in a vacuum.

He rolled his eyes during Conway’s 13-minute-long interview after she made multiple assertions that he felt didn’t add up to explain the firing of Comey. She then turned Cooper’s valid criticism into a moment to brag, once more, about Trump’s election win. There’s a reason the entire internet loved and ran with Cooper’s eye roll—this was classic Conway condescension being validated.

Conway’s called out sexism before, such as when BuzzFeed News asserted that she was purely decorative to the Trump campaign, or when former Mitt Romney strategist Stuart Stevens tweeted implying she “lived on TV” instead of helped Trump prepare for the first debate, both situations which she unpacked for the New Yorker. Or when Conway, more confusingly, asserted that MSNBC’s Morning Joe exhibited sexist reporting when its hosts discussed Trump being upset with her, which was intel they said they received from Trump’s transition team.

Yes, examples of sexism against Conway exist, but not when she attempts to mold them to fit her own narrative.