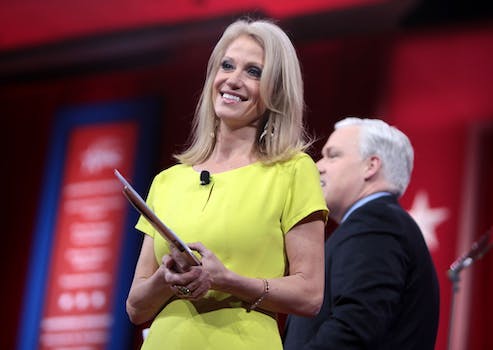 Many are wondering if Trump's campaign manager knows what 'sexist' means.

After making the media rounds this weekend to decry Mitt Romney as a possible secretary of state, Donald Trump’s campaign manager, Kellyanne Conway, is now calling MSNBC’s coverage of her “sexist.”

It all started Sunday when Conway blasted Trump on CNN for his decision to consider and meet with Romney, saying people in his camp felt “betrayed,” and that Romney consultants had been “the worst” on Twitter. Though Conway said she and the party would support whomever Trump picked for the cabinet position, she confirmed that she was personally against the pick.

On Monday, MSNBC‘s Morning Joe reported that two sources at the top of Trump’s transition team said they spoke with the president-elect, who was “furious” about Conway’s comments on CNN.

Shortly after the report, Morning Joe host Joe Scarborough received a text from Conway on-air telling him the show’s reporting was sexist.

Conway responds to #morningjoe report on Trump campaign's reaction to her Romney comments. The panel weighs in. https://t.co/hTs91LLfgb

“I’m not sure how that reporting is sexist,” Scarborough said to the show’s panel. “Is she suggesting that … the three people at the top of the Trump transition campaign are sexist? It’s sexist? I don’t understand what’s sexist about…why are they sexist for saying that?”

Whether Conway was talking about MSNBC’s coverage or the reports from the sources within Trump’s campaign, the panel agreed neither were sexist since neither were likely fueled by discrimination based on her gender.

Perhaps Conway has a fundamental misunderstanding of what sexism is. If she did fully understand the concept, she may have expressed disapproval at the decades of sexist feedback faced by Democratic presidential nominee Hillary Clinton and the thousands of comments her client Trump has made about women’s bodies, faces, and “grabbable” parts.