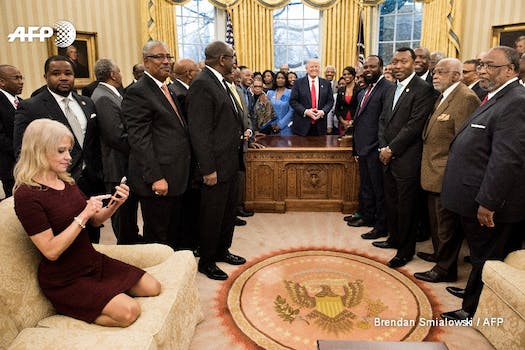 So many boxes, too much to unpack...

On Monday night a photo by the AFP News Agency and Conway herself received widespread Twitter critiques after the image was shared from the agency’s account.

The picture, taken amid a meeting between President Donald Trump and more than 100 leaders from historically black colleges and universities around the United States, shows many of these leaders standing around the president at his desk in the oval office for a photo op. 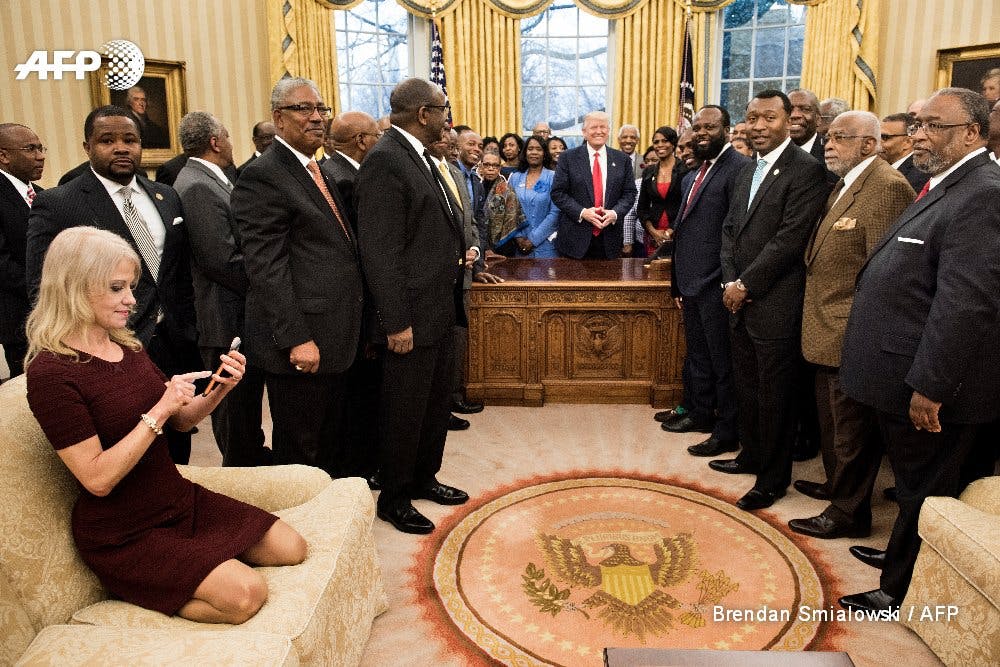 And to the bottom left of the frame, an apparently clueless Kellyanne Conway kneels with her feet on a couch while she checks her phone. In the photo, she looks unaware of anyone else’s presence but her own, as many of us appear when we’ve tuned out present company to check social media. She probably didn’t anticipate that the politics of her feet on a historical piece of furniture would be next on her news feed.

Twitter ran with this bizarre photo, critiquing Conway’s perceived lack of manners, disrespect of the president and the HBCU leaders in the room, as well as her own ignorance to let her feet mar a historic of furniture.

Hey, @KellyannePolls. Just a very tiny #ProTip for the next time you're in the presence of a standing #POTUS. https://t.co/QNQNUtDS42 pic.twitter.com/Rg4s8gS3QH

such a classy way to sit in the Oval Office.. KellyAnne clearly was not taught how to sit properly in a dress…

There are also some implicit messages within the image, such as the double standard of a white woman being able to sit on the couch without receiving the amount of critique as if one of those black men or women would have done the same.

In this photo exists every comment on race and on respectability to be had on earth pic.twitter.com/5E2Q38dxaX

Now, you can't expect us to take this "meeting" seriously when this is the setting. pic.twitter.com/IAx34PlliM

People are saying "But Obama put his feet on his desk" as if we're upset about Kellyanne disrespecting the FURNITURE in the Oval Office pic.twitter.com/tHMUIibw6w

As conservatives defend classless Kellyanne Conway in Oval Office don't forget they blew a gasket when a black man put his feet ON HIS DESK pic.twitter.com/kgOZbc0Rkr

Many commenters also noted that had their own professors or family members been in that room, they wouldn’t have dared to put their feet on the couch.

That photo of Kellyanne Conway is still giving me chest pains. Meanwhile I got yelled at for walking on the *carpet* with shoes on.

Kellyanne Conway trying to get hit with a wooden spoon if she did this in my mothers house https://t.co/34nkkLZn0i

And at the same time, there came the critiques of the critiques, the insinuation that women like Conway cannot just live their lives and stand on couches all willy nilly without being body policed to be prim and proper, and sit on couches like well-trained sea otters.

"Leave Kellyanne Conway alone!" – white people who lost their shit when Obama was photographed in the Oval Office without a suit jacket

Sure, I definitely buy the idea that a respectable albeit small amount of the people upset with Conway’s position on the couch are upset because they love to tell women what to do with their bodies and how to act like the domestic birthing hosts we are.

But as it stands (pun intended) Conway’s feet on this couch didn’t happen in a vacuum, and can’t just be criticized as such—Conway is a counselor to the president, and she’s kneeling on what could probably be considered a historic couch during a very meeting with people Trump is attempting to create an understanding with. It was not a good move on her part regardless of race or gender.

She was taking a photo. This is the dumbest outrage ever. pic.twitter.com/qtHkaGpH9N

For the record, as seen in the tweet above, Conway had just taken a photo with the phone in her hand before being snapped in this pose. But there was probably a much, much better way to achieve such a perspective without, say, putting your feet on the couch. Like sitting. Or perhaps kneeling or crouching slightly while standing on the carpet beside the couch.

As seen with those photos of President Barack Obama with his feet on the desk in the Oval Office, there are probably a slew of people who have put their feet on White House furniture before Conway, as there will be after her. But that doesn’t change the fact that Twitter once again dragged Conway for acting foolish in the White House.

The ancestors put plastic on the furniture just for women like Kellyanne Conway. pic.twitter.com/oM7a9uu4MH