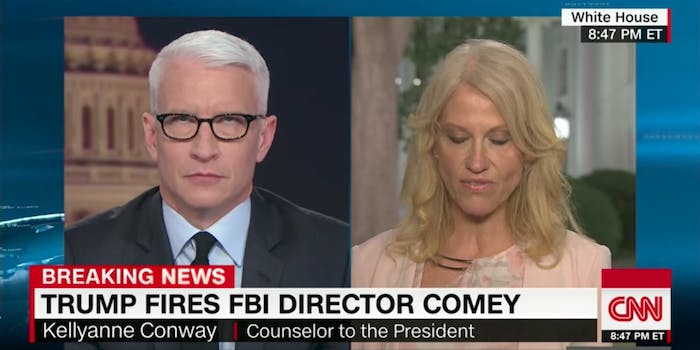 'Twas the reaction seen 'round the world.

On Tuesday night, the White House summoned Kellyanne Conway from whatever hidey hole she’s been twiddling her thumbs in to discuss former FBI Director James Comey’s firing, and it went about as well as any Conway appearance could be expected.

Throughout her 13-minute visit with host Anderson Cooper, Conway continually referred Cooper back to Comey’s notices of termination; denied any correlation between Comey’s firing and his leading the investigation on the Trump administration’s possible collusion with Russia during the 2016 election; and told Cooper he wasn’t allowed to talk about Trump’s praise of Comey for investigating Hillary Clinton‘s emails.

Related to the last point, 10 minutes into the interview, Cooper played an old clip of Trump commending Comey’s email investigation and stated that while Trump now says that Comey’s investigation was wrong, previously he had said it was the right thing to do. And without missing a beat, Conway fired back.

“You’re conflating two things that don’t belong together. Thanks for the trip down memory lane—I was on your show often last fall saying we were going to win Michigan and how we were going to do it,” she said coyly, even winking. “So that was fun, but here’s what happened today.”

That’s when Cooper sent out the facial reaction felt ’round the world—an eye roll so well-deserved and satisfying that all of Twitter couldn’t help but immortalize the look from CNN’s silver fox.

So here's a gif of Anderson Cooper eyerolling at Kellyanne Conway pic.twitter.com/HT0Q1oTDV4

That eye roll looks like quite a doozy. Tbh we’re lucky his eyes didn’t get stuck while they were up there. Where could we have gotten the perfect political reaction GIF otherwise?

Watch Cooper’s eye-rolling reaction to Conway in action below: