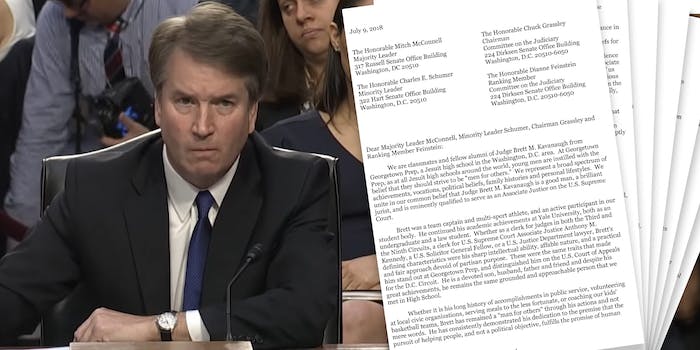 Her tweets show how difficult it is for women to come forward.

A woman says one of the men testifying to the character of Supreme Court nominee and alleged sexual assailant Brett Kavanaugh hosted a party where she was sexually assaulted.

“I was sexually assaulted in the mid-80’s at the home of one of Kavanaugh’s schoolmates,” a woman who goes by Casey Mooney wrote on Twitter on Thursday. “The host of that party added his name to this letter to the Judiciary Committee attesting to Kavanaugh’s character.”

Last week it was revealed that an anonymous woman wrote a letter to Sen. Diane Feinstein (D-Calif.) that Kavanaugh had sexually assaulted her when she was 15 and he was 17; on Sunday, Christine Blasey Ford came forward to say she wrote the letter. Since then, Congress and the country at large have been embroiled in a debate about how to move forward with Kavanaugh’s nomination. Some people have defended Kavanaugh with a “boys will be boys” attitude and attempted to smear Ford. But many also say that these allegations must disqualify him from the Supreme Court seat.

Adding to that chorus of voices is Mooney, who addresses some of the common criticisms and defenses that have been levied by conservative politicians and right-wing media throughout the week. To the people who say that Ford should have come forward sooner, Mooney wrote, “‘Date rape’ was barely entering the lexicon. We thought rape and assault were things that happened in parking garages or dark alleys. We didn’t know how to quantify these actions by men in our own peer groups.”

To those who use Kavanaugh’s age at the time of the alleged assault as a defense, Mooney wrote, “Can you grow out of being rapey? I hope so. I’d like to believe in redemption. But I do think a rapey past should disqualify you from a seat on the Supreme Court.”

Throughout the thread, Mooney tagged 21 senators and directed her last tweet at them: “Are you sure that rape is the hill you want to die on?”

To our elected representatives:
– rape is non-partisan
– sexual assault survivors are watching you
– our children are watching you.
Are you sure that rape is the hill you want to die on? 11/#angrywomenvote

Like many sexual assault survivors have expressed, Mooney also reflected on how painful the past week has been, watching the public and government officials pick apart Ford’s credibility and motives. For coming forward, Ford has received death threats and had to flee her home, showing exactly why so few women ever do.

The Daily Dot has reached out to Mooney for further comment and will update if she responds.