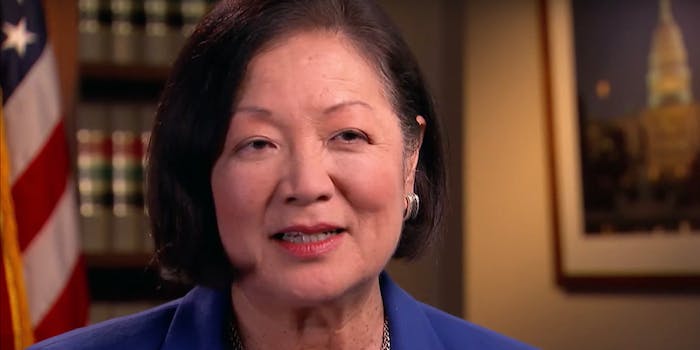 Sen. Mazie Hirono to men: ‘Just shut up and step up’ against Kavanaugh

She said what tons of women are thinking.

For a majority of the past year, Sen. Mazie Hirono (D-Hawaii) has made it her personal duty to ask all Trump administration nominees that encounter the Senate Judiciary Committee if they’ve ever committed sexual harassment or assault. And it’s about time that other Americans—particularly men, senators, congressmen, and constituents—join her in that effort across the board.

Hirono on Tuesday addressed the accusation of attempted sexual assault that Christine Blasey Ford has made against Supreme Court nominee Brett Kavanaugh, In her statement, the senator called upon American men to “just shut up and step up. Do the right thing for a change.”

A reporter had asked if Kavanaugh’s vote and a potential FBI investigation were helped by the fact that there are other women on the committee. In response, Hirono turned the spotlight to men.

Mazie Hirono: "I just want to say to the men of this country: Just shut up and step up. Do the right thing for a change." (via CBS) pic.twitter.com/pUbyrXeeiu

MAZIE HIRONO IS A QUEEN. https://t.co/zZoWLR9x6Z

Hirono’s call to action comes three days after Ford came forward as the woman who had written a letter to Sen. Dianne Feinstein (D-Calif.) detailing her attempted rape. Ford told the Washington Post that in 1982, when she was 15 and he was 17, Kavanaugh pinned her down to a bed, groped her, tried to take off her clothes, and covered her mouth to prevent her from screaming.

Therapists’ notes corroborated Ford recalling this account in 2012 but do not name Kavanaugh. The Supreme Court nominee denies committing the assault that Ford described.

In the week since Feinstein legitimized the letter’s existence, the response to Ford’s account has been damning. Senate Judiciary Committee Chairman Charles Grassley released a letter speaking highly of Kavanaugh’s character, signed by 65 women who knew him as a high school student. Others have characterized the attempted assault as “rough horseplay” and criticized Feinstein for not sooner bringing forward the letter, which was originally intended to remain anonymous.

Donald Trump Jr. responded crassly, sharing a meme about the letter likening it to a love note sent by a elementary schooler. Some, including Grassley, have questioned the fairness of making Kavanaugh withdraw his nomination for an assault that, if true, he would have committed at 17 (the other side contends that if the alleged assault occurred, no matter when it was, Kavanaugh shouldn’t be appointed to a potentially lifetime position).

Overall, conservatives have pushed back on the accusation and any investigation of the behavior described in the letter. Meanwhile, Ford’s lawyer has said she would testify before the Senate Judiciary Committee’s Kavanaugh vote (while senators say they’re still waiting for her to confirm), subjecting herself to scrutiny regarding an interaction that left an impact on her life, if not traumatized her.

So, it’s not for nothing that Hirono is passionately incensed. She’s pissed because not enough people are taking Ford’s allegations seriously and therefore aren’t taking the approval of a possible Supreme Court judge seriously. Hirono even tried hedge her frustration, ending her statement by saying, “you can see I’m a little upset by this, the fairness of it.”

But she’s not wrong to call on men to prevent other men from using their power to abuse—and avoid the consequences of abuse. It’s nonsense that she even felt the need to evoke levity at the end of her statement.

As I was asking @maziehirono questions just now, she looked right at @SenateMajLdr as he was passing in Ohio Clock corridor outside Senate chamber, and said: “Do the right thing!”

As a senator, Hirono always been addressed injustice. Earlier this year, she asked a top Immigration and Custom Enforcement official if he’d send his child to family detention centers if they were so much like “summer camps.” She once said that members of the Trump administration who lie for the president have “sold their souls.” She said “fuck them” to critics of her sexual harassment questioning. She even traveled to Washington to vote against repealing the Affordable Care Act while fighting kidney cancer.

With her call to action—to direct attention toward men instead of perpetuating the role of women to fix injustice—Hirono is once again solidifying her unofficial title of badass. The impassioned statement is surely far from her last.