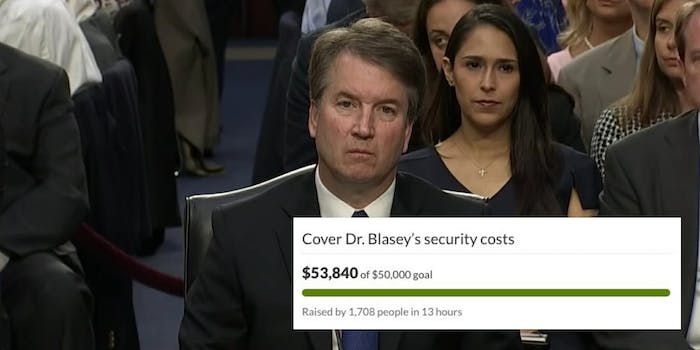 Since coming forward against Kavanaugh, the professor has been harassed and received death threats.

Dr. Christine Blasey Ford, the Palo Alto University professor who said Brett Kavanaugh sexually assaulted her and attempted to rape her when they were in high school 35 years ago, has faced death threats since coming forward. According to the New York Times, her email has been hacked, she’s had fake accounts impersonate her online, and her family has moved out of their home and hired a private security firm, all in the three days since she said she was the woman who wrote the letter to Sen. Diane Feinstein (D-Calif.) about being assaulted by the Supreme Court nominee.

Now, the internet is assisting with her security costs, raising more than $50,000 in just a few short hours.

I have started a GoFundMe to raise money to cover Dr. Christine Blasey Ford’s security costs. https://t.co/1AW1SQxYOi
I would like to have one or more “teammates” with Facebook accounts to help spread the word. Pls DM me if you are willing to play this role.

A great way to show your support and let Dr. Christine Blasey Ford know you have her back is to donate to a gofundme set up to help her with her private security costs. The fundraiser is being done by Georgetown Law Professor, Heidi Feldman. https://t.co/38cDkuBFaO

On Tuesday, Heidi Feldman, a Georgetown Law professor who doesn’t know Ford personally, launched a GoFundMe campaign to help cover hired private security. Within four hours of the campaign’s launch, more than 1,700 contributed more than the campaign’s first and second goals of $25,000 and $50,000, bringing the total to $53,840. Feldman then paused the campaign, waiting to receive word from Ford about the extent of her security costs.

As of Wednesday morning, however, Feldman re-opened the campaign, adjusting the campaign goal to $100,000. She wrote that she had been in contact with Ford’s representatives, “who have assured me that she needs and will accept our assistance with security costs.” In the first 20 minutes of the campaign’s reopening, another $2,000 were donated.

“The display of solidarity and forceful collective action has heartened me, and I am sure will hearten Dr. Blasey Ford and her family,” Feldman wrote. “Thank you to all who have given to and publicized this effort.” (Feldman did not return the Daily Dot’s request for comment.)

These efforts, the $100,000 campaign goal, and Dr. Blasey’s relocation of her family to escape death threats and additional risk, speaks to the nonsensical idea that women, Ford included, lie about sexual assault and falsely accuse men for attention, or any other motivation than warning others about the past alarming behavior of a man in power.

Women are treated like liars when they accuse men of sexual assault. But somehow Brett Kavanaugh—he of the multiple lies under oath—gets the benefit of the doubt. I wrote about that for @RollingStone, asking: What does a man have to do to not be believed? https://t.co/axVD3lyJ55

Exhibit 952738592694 why speaking out as a survivor is not “opportunism” or “for fame,” as people with no understanding of assault like to claim.

It’s harrowing. It’s an enormous risk. And this is the result. #IBelieveChristine https://t.co/lLO9YT17Z1

Because you assholes burn down their houses and threaten to kill them.
Do we really have to go through this again?#MeToo https://t.co/nhVr96voRx

Originally, Ford had wanted to remain anonymous, according to her own congresswoman, Rep. Anna Eshoo (D-Palo Alto). She may not have wanted to become this face of the Me Too movement, and worried about her safety after sending the letter to Feinstein via Eshoo’s office, but she found Kavanaugh’s nomination to be worrisome enough to speak up. She shared her experience with a world that she already knew would attack her character, if not threaten her and her family’s existence.

As a result, $100,000 raised to support Ford during this moment of backlash may cover her private security costs, her family’s temporary housing, and whatever else she may need to pay for as a result of the threats to her family’s safety, but for how long?

If women lie for fame and attention, then Ford’s reward is costly at least, and deadly at worst.

Update 12:38pm CT, Sept. 27: As of the afternoon of Sept. 27, the day Ford is giving testimony to the Senate Judiciary Committee regarding her sexual assault allegations against Kavanaugh, the GoFundMe has raised nearly $210,000.

A second separate GoFundMe campaign created on the same day as Feldman’s campaign has raised more than $359,000 for Ford’s security.