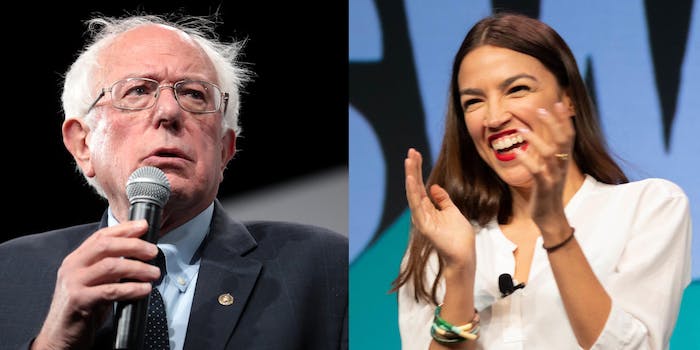 Sanders seemed to hint at the endorsement during Tuesday's debate.

2020 presidential hopeful Sen. Bernie Sanders (I-Vt.) will receive an endorsement from Rep. Alexandria Ocasio-Cortez (D-N.Y.) and other members of the so-called “squad,” according to reports.

Sanders seemed to tease the endorsement during last night’s 2020 Democratic debate, hinting that a “special guest” would join him at a rally in Queens, N.Y., this weekend.

“We’re going to have a special guest at that event,” Sanders said during the debate.

The news Ocasio-Cortez—who surged into the national spotlight after upsetting former Rep. Joe Crowley in a primary ahead of the 2018 midterm elections—would endorse Sanders was first reported by the Washington Post.

Corbin Trent, a spokesperson for the New York lawmaker, told the Post that they were “looking forward to Saturday.”

Other members of the “Squad” are also backing Sanders and his presidential bid.

“Bernie supports guaranteeing healthcare for all, creating a humane immigration system that doesn’t treat immigrants like criminals, and ending forever wars. He is fighting for the America we deserve — one that collectively works toward a brighter future for every one of us,” Omar wrote in a series of tweets on Wednesday. “For all these reasons and more, I have no doubt that @BernieSanders is the best candidate to take on Donald Trump in 2020. Let’s get him elected!”

.@BernieSanders isn’t fighting to win just one presidential election — he’s fighting for the soul of our democracy.

Here’s more on why I’m so proud to give Bernie my endorsement for president of the United States: pic.twitter.com/1NLMPnzS1x

Rep. Rashida Tlaib (D-Mich.) is also expected to endorse Sanders, according to CNN.