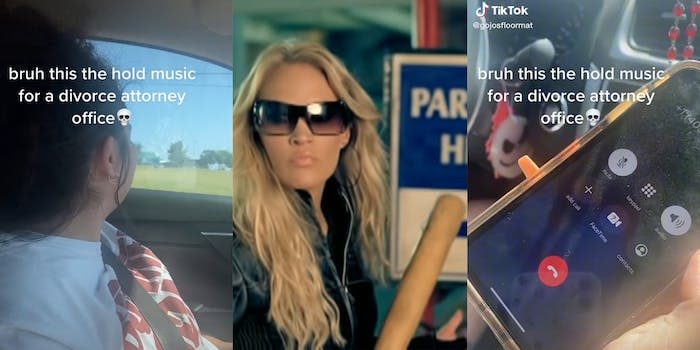 ‘They gotta keep u motivated to go through with it so they get paid’: Divorce attorney’s hold music goes viral

‘Don’t want to forget how angry you are while you’re on hold.’

A TikToker went viral this week for sharing a video of hold music—the infamous break-up revenge song “Before He Cheats” by Carrie Underwood—being played when she was allegedly on the phone line for a divorce attorney’s office.

The video, which has over 2.9 million views and was posted by TikToker Laralee (@gojosfloormat), shows a recording of two friends laughing as an iPhone on a phone call plays “Before He Cheats,” a multi-million dollar country song written by Underwood in 2005 about a woman wrecking the car of her cheating partner.

In the video, the TikToker alleges the music was played while on hold for a divorce attorney’s office.

“Bruh this the hold music for a divorce attorney office,” the TikToker captioned the video.

The Daily Dot could not independently confirm whether the music was actually being used for a divorce attorney’s office, as opposed to some other kind of company’s phone line, or where the video took place. The TikToker did not respond to our request to verify the phone number of the divorce attorney’s office in time for the publication of this article.

However, the TikToker told the Daily Dot in a message on Instagram that she found the music when her sister called her divorce lawyer, and they decided to put it on speaker and record it.

Many users in the comments section found the video to be hilarious and provided many witty jokes about why the supposed divorce attorney might use the music.

“They gotta keep u motivated to go through with it so they get paid,” one user commented.

“Don’t want to forget how angry you are while you’re on hold,” another replied.

“They understand the assignment,” a third joked.

In the comments section, a well-known meme page called Betches even requested to use the TikTok on their Instagram page with over 8.5 million followers. TikToker Laralee described the experience of going viral and receiving this sudden online attention to the Daily Dot.

“We’re from rural oklahoma so i didn’t think much of it lol,” the TikToker told the Daily Dot in a message. “Its kinda weird going viral because like i said [i’m] not from a well known part of [the] U.S. so its very unusual to have like widely followed meme pages want to use my video.”