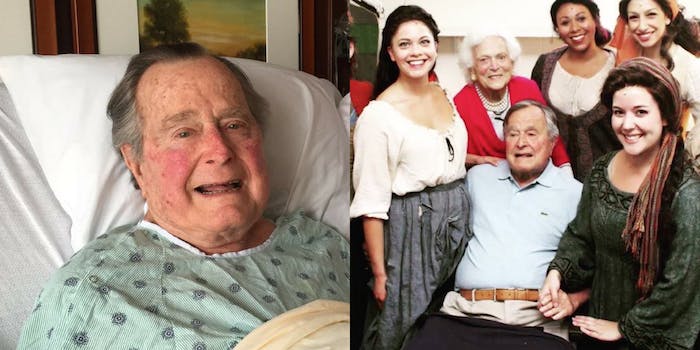 Photo via GeorgeHWBush/Twitter Screengrab via Deadspin

Don't shame women for coming forward—even if Bush's age may be a valid excuse.

Over the past two days, three women have come forward to accuse former President George H.W. Bush of sexually assaulting or groping them during two separate photo opportunities with the president and his wife, former First Lady Barbara Bush.

Actresses Heather Lind and Jordana Grolnick have both alleged that the former president groped them on the butt while taking photos with the couple. Lind said the assault happened during a private screening the Bush’s hosted of the AMC show Turn: Washington’s Spies in 2014, while Grolnick said her interaction happened in August 2016, when she was working in a Maine production of Hunchback of Notre Dame. While Lind said Bush had also made an inappropriate joke toward her, Grolnick specified he told her his favorite magician was “David Cop-A-Feel.”

In a third account, author Christina Baker Kline published a piece for Slate alleging that Bush had used the same line during a photo op at the 2014 Barbara Bush Foundation for Family Literacy fundraiser. Baker wrote the former president “squeezed my butt, hard, just as the photographer snapped the photo. Instinctively, I swiped his hand away.” When she told her husband what had happened in the presence of a Bush family friend, the friend said she trusted Kline to “be discreet,” as if following an accustomed pattern for damage control. Bush’s camp has since confirmed the behavior described in the allegations and apologized to the people he’s offended.

Their claims are on the cusp of weeks of hundreds of collective allegations made against producer Harvey Weinstein, director James Toback, and a myriad of men throughout entertainment, tech, publishing, and journalism. Lind and Grolnick have joined the newly emboldened (if not also overwhelmed and exhausted) masses of women who have long stayed silent against their aggressors and abusers.

However, unlike the women who have participated in the story-swapping hashtag #MeToo, Lind’s, Grolnick’s, and Kline’s accounts have not been welcomed in the same, arms-open, “We believe you” manner—or, welcomed at all.

Before the second allegation came to light on Wednesday evening, NBC News’ Andrea Mitchell argued, “Mrs. Bush was at his side. He is in a wheelchair with Parkinson’s syndrome. Really? Someone should be ashamed and it isn’t [Bush].” Several other critics echoed this sentiment, that Bush was 93 years old, diagnosed with Parkinson’s disease that affects his motor abilities, and has used a wheelchair for five years.

Mrs Bush was at his side. He is in a wheelchair with Parkinson's syndrome. Really? Someone should be ashamed and it isn't '41. https://t.co/CGhy8yNX5i

Look. George H.W Bush is 94 YEARS OLD. @heatherglind is just using the former president as a means to publicly shame him. Sad.

Sure guys, 93 Year old GWH Bush is the same as Harvey Weinstein. Run with that. Can't wait to see the charges.

Old man in wheelchair tries to make light of his awkward limited mobility when posing for pics; lynching ensues.https://t.co/FilJMPWMaN

Without mincing words, finger-waggers on Twitter argued that these women should not have come forward with their allegations. Naysayers insist that, understanding Bush’s old age and his Parkinson’s diagnosis, the women should have known that Bush isn’t intentionally offending with his actions, and should have interpreted his “David Cop-A-Feel” comments and “pats” on the rear end as a way to make light of his Parkinson’s condition.

These critics also point out that nurses and families with older loved ones understand that Bush may be losing his “filter” and acting out as a result of his age and condition. They say he is being shamed for his loss of mobility and his inability to control his actions in his old age. These women, instead, should be ashamed for speaking out.

While I’m in no way qualified to comment on the medical validity of this argument (we’ve reached out to the Gerontological Society of America and the National Parkinson Foundation, but the former was unable to offer comment while the latter has not responded), I do have the perspective of someone who has seen the human condition vary with age. And I get that this appeal for empathy and understanding is, well, understandable. Bush’s attitude and behavior could very well be affected by his age and diagnosis.

At the same time, any amount of validity coupled with this call for sympathy shouldn’t discount how Lind, Grolnick, and Kline feel about their encounters with the former president. Duality does exist, and no ounce of reasonable explanation for Bush’s behavior should dampen how the two women perceived an unwanted, nonconsensual touch of their butts and a creepy joke—the surprise, the violation, the internalization, and the shame they’ve recalled this week.

While critics’ knee-jerk reactions have been to immediately defend Bush by discrediting the women, Bush’s camp has not denied the allegations. His spokesperson, Jim McGrath, has gone so far as to explain in Bush’s apology that, yes, this is something the former president has done. While listening to women is important regardless of the burden of proof, the fact that people have still tried to invalidate the way these women felt about the encounters, even when the accused has confirmed the allegations, speaks volumes to our overall reluctance to believe women, and our inability to coherently process a personal boundary violation as a violation at all.

No, these women are not accusing Bush of behavior of Harvey Weinstein-sized proportions. Does that mean their own understanding of being groped is any less serious, or less worthy of believing or talking about? No, absolutely not.

Regardless of how we feel about an older ex-president being accused of “[patting] women’s rears in what he intended to be a good-natured manner,” as Bush’s spokesperson has put it, that doesn’t negate the way Bush’s actions have made these women feel. As journalist Soledad O’Brien has pointed out, both of these realities can be true and can coexist in the same narrative.

However, our own righteous refusal to consider and empathize with one over the other shows just how little we pay mind to women’s trauma, even when it’s validated by the accused themselves.

Editor’s Note: As of Oct. 27, 3:40pm, updated throughout to include a third woman, Kline, coming forward.