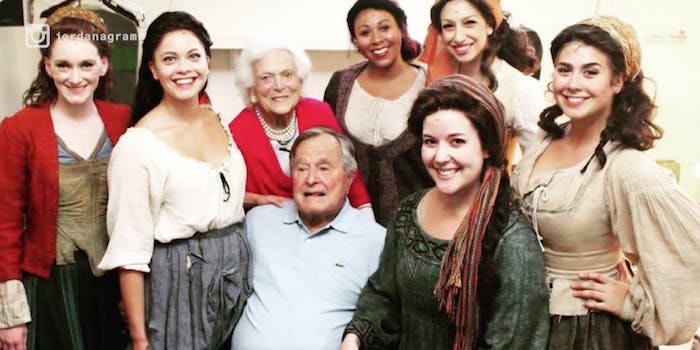 Bush's spokesperson says the jokes and touches were 'good-natured.'

Less than a day after actress Heather Lind publicly accused former President George H.W. Bush of sexually assaulting her during a photo-op, a second woman has come forward with similar allegations.

Speaking to Deadspin, New York-based actress Jordana Grolnick said she too was groped by Bush during a photo-op. Grolnick said that in August 2016, while working in a Maine production of Hunchback of Notre Dame, she and the rest of the cast took a photo with Bush backstage during a show intermission. She said she had been told before that “Bush had a reputation for fondling during photo ops,” but was skeptical until that moment:

“We all circled around him and Barbara for a photo, and I was right next to him,” she says. “He reached his right hand around to my behind, and as we smiled for the photo he asked the group, ‘Do you want to know who my favorite magician is?’ As I felt his hand dig into my flesh, he said, ‘David Cop-a-Feel!’”

Grolnick said the room uncomfortably laughed at the joke, and proceeded to laugh when Barbara Bush said something along the lines of, “He’s going to get himself put into jail!” She then went to post the photo on Instagram. The caption formerly read, “George H.W. Bush has a favorite magician. It’s “David Cop-A-Feel.” He told us so. Barbara has no opinion on magicians. #history.” Grolnick is to the left of Bush in the photo.

Deadspin reporter Dave McKenna wrote he had heard Lind’s story more than a year ago on a tip, and while reporting it out had found two other references to Bush’s “Cop-A-Feel” joke on Twitter. McKenna reached out to Grolnick this week upon seeing Lind’s allegations resurface.

“What I’ve come to realize is that if we tolerate these small comments and grazes from men on the street or former presidents, they might assume that it’s ok with us, and they may take it as permission to do who-knows-what else. I realize that making light of the situation was the wrong move. It wasn’t OK for him to do that to me,” Grolnick said about speaking out on her interaction with the president. “He wasn’t able to give me a job or a movie deal, so I didn’t feel compromised or pressured to do anything more, but the comments and assumptions about our bodies must stop, at all levels.”

In response to the second allegation, Bush’s spokesperson Jim McGrath told Deadspin in a statement that Bush has used this joke to put people at ease during photo ops because of his arm placement as a result of being in a wheelchair, and that patting women’s rear ends was intended to be “good-natured.”

“At age 93, President Bush has been confined to a wheelchair for roughly five years, so his arm falls on the lower waist of people with whom he takes pictures. To try to put people at ease, the president routinely tells the same joke—and on occasion, he has patted women’s rears in what he intended to be a good-natured manner,” McGrath’s statement read. “Some have seen it as innocent; others clearly view it as inappropriate. To anyone he has offended, President Bush apologizes most sincerely.”