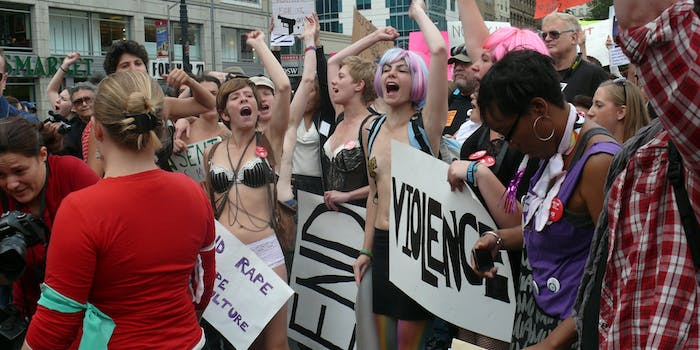 What are men doing about it?

Across Twitter and Facebook Sunday night, women around the world joined in on the #MeToo hashtag. The premise: Women post “#MeToo” or “Me too” on their social media profiles, demonstrating that they’ve experienced sexual harassment or assault in their lives.

The trend began after actress Alyssa Milano encouraged others to stand up and share their stories online to give others “a sense of the magnitude” of sexual harm against women. Over the past week and a half, the news cycle has been dominated with continuous sexual assault and harassment allegations against Harvey Weinstein, which has sparked a national conversation about how common male predatory behavior is, inspiring many women to come forward with their own stories of assault and harassment across social media.

If you’ve been sexually harassed or assaulted write ‘me too’ as a reply to this tweet. pic.twitter.com/k2oeCiUf9n

Women weren’t the only ones to join the trending hashtag, and many men who experienced sexual harassment or assault (particularly queer and trans men) participated. Women across races and backgrounds, even celebrities, also contributed their own stories, highlighting that nearly all women have faced sexual harassment, assault, or, likely, both.

My Facebook feed is full of “me too.” Increasingly clear that what’s surprising is when a woman doesn’t have a story.

It's taken me 13 years to say #MeToo .He is still protected by 'family members' in Brazil. They've told lies to papers to try to silence me.

To all the women sharing stories of sexual assault and sexual harassment, thank you for your bravery to speak up. You are not alone. #MeToo

#MeToo wasn’t the first trending hashtag on the matter, either. On Friday, the Weinstein allegations—and temporary suspension of actress Rose McGowan, who spoke out about those allegations and those of other Hollywood men—also sparked a controversial boycott by women against Twitter, splitting social justice activists who felt the hashtag was largely created and defended by white women. And like #WomenBoycottTwitter, #MeToo’s trending campaign has ushered in similar criticism. For one, it prioritizes women’s victimization, letting predatory men off the hook for their behavior.

Don't say you have a mother, a sister, a daughter…

Say you have a father, a brother, a son who can do better.

There’s also the fact that #MeToo places heightened visibility onto survivors. That means, while out survivors can freely share their stories, men can assume those who don’t talk about their sexual assault have never experienced it. Which isn’t necessarily true. Many survivors simply don’t feel comfortable talking about their experiences publicly. Others still need time to process their assault and may realize their experiences at a later date.

Either way, #MeToo puts too much pressure on coming out, and too little on the silent survivor’s struggle.

I hope ppl find catharsis in #MeToo etc but just a reminder you absolutely don't have to share, the responsibility for this is not on you

Most of all, #MeToo doesn’t universally represent all women. The hashtag originated with a white woman, and largely ignores women of color’s work on calling out sexual harassment and assault in the past. Various hashtags created by Black women and women of color, such as #YouOKsis and #WhatWereYouWearing, were largely ignored by white women across the internet before #MeToo came out. So now that #MeToo is trending, and white feminists might think it’s the first time women have collectively spoken out against sexual harassment, women of color’s hard work discussing sexual assault has been erased and whitewashed.

Talking about the harm #WhiteFeminism can/does do, seeing @steenfox’s HT from 3yrs ago #WhatWereYouWearing be erased is a prime example.

Feminista Jones started #youOKsis a while ago. Check it out for tons of stories. Women have BEEN saying #MeToo
Glad someone is finally listening.

It doesn’t help, either, that #MeToo’s coverage largely focuses on white women. Primary images on Mashable, the New York Times, and the Hollywood Reporter focus on Milano, ignoring the larger legacy of behind Black women standing up and speaking out against sexual assault. When Milano isn’t featured, most sites turn to Weinstein, with Salon, the Washington Post, and CNN all discussing the ousted Hollywood executive. That’s not to say Weinstein’s sexual assault allegations should be ignored, nor should Milano’s experiences be downplayed. But it just goes to show that white women are largely put at the forefront, and very few writers want to explicitly talk about—or may not even know about—women of color’s role in calling out sexual harassment. The truth is, there are many Weinstein-esque predators out there, and the allegations levied against him can be found throughout industries and social environments. From media to music, it impacts marginalized women more than #MeToo cares to admit.

#MeToo may be shedding light on sexual harassment and assault, but that doesn’t make it immune from criticism. The next time women come together to call out predatory sexual behavior, let’s hope it’s more inclusive toward survivors of all kinds—not just white cis women. Let’s hope the onus isn’t put on women to do something about assault—let’s hope men step up and hold themselves accountable.