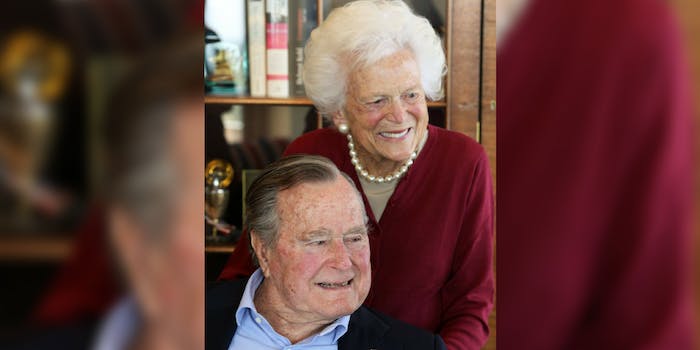 Actress says he groped her; Bush claims it was an 'attempt at humor.'

Former president George H.W. Bush‘s camp is apologizing after an actress said he sexually assaulted her during a photo op. His spokesperson called the incident “an attempt at humor.”

In a now-deleted Instagram post shared on Tuesday, actress Heather Lind accused Bush of assaulting her while she was promoting the AMC show Turn: Washington’s Spies in 2014.

Lind wrote that during the photo op, Bush had touched her from behind, told her a dirty joke, then touched her again while being photographed. Lind wrote that Barbara Bush stood on the other side of her husband, and “rolled her eyes as if to say ‘not again.'” Lind said that after the event, Bush’s security told her that she shouldn’t have stood next to the president.

According to the Hollywood Reporter, Bush was a fan of the AMC series. He and Barbara had been hosting a private screening in Houston for producers, cast members, and company executives at the time the photo was taken.

Lind said the memory of the assault resurfaced after seeing a photo of Bush and other former presidents at this weekend’s One American Appeal hurricane relief fundraiser.

“I was disturbed today by a photo I saw of President Barack Obama shaking hands with George H. W. Bush in a gathering of ex-presidents organising aid to states and territories damaged by recent hurricanes,” Lind wrote in the post, according to Newsweek. “I found it disturbing because I recognize the respect ex-presidents are given for having served. And I feel pride and reverence toward many of the men in the photo. But when I got the chance to meet George H.W. Bush four years ago to promote a historical television show I was working on, he sexually assaulted me while I was posing for a similar photo.”

Lind also wrote that “judging from the comments” of the people around Bush, she was not the first person he had used his power against. She closed the post with the popular hashtag #MeToo, which has shined a light on the everyday sexual assault and harassment women experience in the wake of predatory allegations against producer Harvey Weinstein.

“My fellow cast-mates and producers helped me that day and continue to support me. I am grateful for the bravery of other women who have spoken up and written about their experiences,” Lind wrote. “And I thank President Barack Obama for the gesture of respect he made toward George H.W. Bush for the sake of our country, but I do not respect him. #metoo.’

In a statement responding to Lind’s accusation, Jim McGrath, Bush’s spokesperson, said he apologized for his “attempt at humor.”

“President Bush would never—under any circumstance—intentionally cause anyone distress, and he most sincerely apologizes if his attempt at humor offended Ms. Lind,” McGrath said.