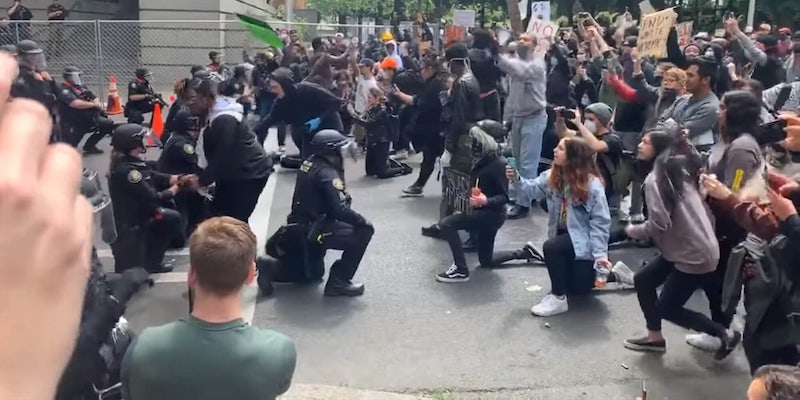 Some cops ‘took a knee’ with protesters. In most cases, it was an empty gesture

These feel-good photos were often followed by tear gas and arrests.

Alongside copious evidence of police brutality during this weekend’s protests, a handful of viral news stories show police officers taking a knee, marching alongside protesters, and showing support for Black Lives Matter. But what do they mean? The Daily Dot found the most widely shared clips seem to be isolated instances involving individual cops or small local departments (“good apples,” if you will) or stunts that were abandoned in favor of tear gas, violence, and arrests.

In the most egregious example, New York City Mayor Bill de Blasio shared a clip of New York Police Department officers taking a knee on Sunday. The gesture was meant to show support for Black Lives Matter and protests against police officers targeting and killing Black people. (For the NYPD, the death of Eric Garner is the most famous case.)

De Blasio posted a link to the video showing police kneeling in respect and tweeted, “This is what happens when police and community see each other’s humanity.” In the context of the NYPD’s overall behavior this weekend, the gesture is insultingly empty.

Trustworthy footage and reports from the New York protests have shown New York Police Department officers beating protesters without provocation and mowing people down with a truck. At least one other clip shows an officer taking a knee in solidarity, but these feel-good moments are massively outnumbered by examples of violence against New Yorkers. A Washington Post reporter described being beaten while clearly displaying his press badge, and an assemblywoman was among the many people pepper-sprayed by police.

Elsewhere, there were more organized examples of police showing support for protesters with varying results. A viral photo shows Kansas City police holding up an “End Police Brutality” sign, and some other Kansas City police removed their masks to kneel in front of protesters. But the same police department also shot tear gas canisters into crowds.

In Orlando, Florida, a couple of officers knelt with protesters in a photo shared by the sheriff’s office, but the department later unleashed tear gas and mace. Tear gas is banned under the Geneva Convention as a chemical weapon, but outside of wartime, police are still permitted to use it for domestic crowd control.

In Coral Gables near Miami, police took a knee in solidarity. The Coral Gables protest was peaceful and included a prayer gathering between police and protesters, resulting in zero reported arrests. This sounds like a miraculously calm outcome compared to the violence elsewhere, but it’s a very different situation than in bigger cities like New York or Los Angeles.

An estimated 200 protesters attended the Coral Gables event, along with 22 police officers. According to the 2010 census, just 3% of the local population is Black, compared to about 19% of Miami residents. That’s a particularly relevant detail when comparing Coral Gables to Miami because we’ve seen plenty of evidence that police react more aggressively toward Black protesters and majority-Black crowds. This particular protest was already controversial among local activists because the organizers invited the police themselves and allegedly did not consult with local Black activists. The fact that it’s an affluent, predominantly white city creates a different dynamic between police and protesters.

Another viral video that emerged from Flint, Michigan, showed the Genesee County sheriff removing his helmet and personally speaking with protesters rather than donning the tactical gear worn by police elsewhere. Local cops joined the demonstrators, and this attempt at dialogue appears to have been successful. The protest was not met by police violence.

Finally, thousands of people have shared “cops taking a knee” footage from Portland, Oregon, a city with a long history of anti-Black racism. Mayor Ted Wheeler tweeted a clip of Portland police kneeling outside the city’s Justice Center. “I know meaningful, transformative healing in our communities is possible,” he wrote. On the same day, Portland police shot tear gas and flash-bangs (aka stun grenades) into crowds of protesters beginning an hour before the 8pm curfew.

These police solidarity videos are very popular, shared both by people who uncritically support the police and by those who support the protests but hope to see a more nuanced, non-violent form of policing in the future. They also continue a long tradition of moves designed to make police look softer and more sympathetic, ranging from photos of cops hugging protesters to the controversial visibility of uniformed police at Pride parades. In the context of the George Floyd protests, these viral videos and photos feel like a classic example of news stories that seem notable because they’re outside the norm.

While a handful of police departments have managed peaceful (perhaps even fruitful) shows of solidarity with protesters, they appear to be in the minority. The overwhelming message from this weekend’s protests is that American police are heavily militarized, routinely targeting protesters and journalists with whatever weapons they have at their disposal.