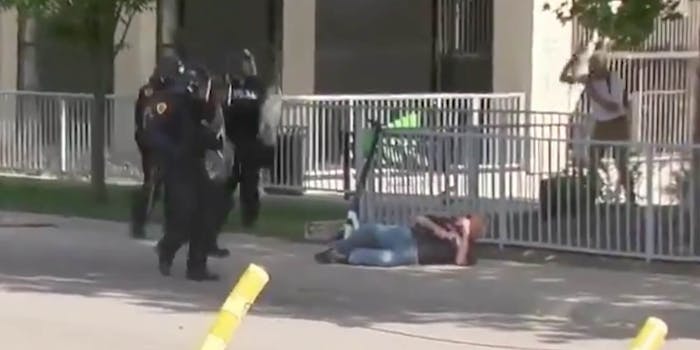 The man, who was just standing around, was pushed at least four times prior to hitting the pavement.

Police in Utah were seen shoving an elderly man to the ground as protests sweep the nation following the death of George Floyd.

The incident, captured by ABC4 News in Salt Lake City, shows police outfitted in riot gear approaching the man before one officer shoves him over, seemingly unprovoked.

The man, who was holding onto a walking cane, was pushed at least four times prior to hitting the pavement.

“Sadly, a man was just knocked off his feet,” a reporter can be heard saying.

The officers responded by helping the man back up, although the damage had already been done.

Protesters had gathered near the Salt Lake Police Department earlier that day, although it remains unclear whether the elderly man was even involved.

The National Guard was eventually brought into the city to enforce an 8pm curfew.

The city also made headlines after a man threatened protesters with a hunting bow. The man was subsequently attacked and had his vehicle set on fire.

The incident is just one example of police violence as protests and riots befall major cities across the country.