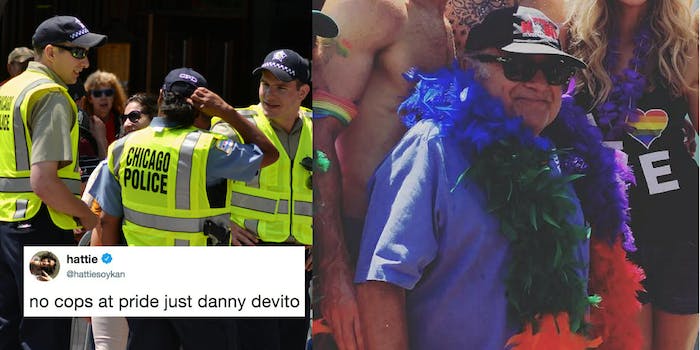 ‘No cops at Pride’ is your favorite meme celebrating LGBTQ history, Danny DeVito

No cops at Pride? No problem.

Yes, DeVito made an appearance at Los Angeles’ Pride celebration this weekend with several of his It’s Always Sunny in Philadelphia costars. And it’s clear, the people couldn’t get enough of the man and his “trollfoot gay pride.”

It isn’t just DeVito that the LGBTQ community is enlisting to protect and serve during Pride celebrations—tens of celebrities and pop culture references are getting the “no cops/police at Pride” meme treatment. It’s fairly straightforward: Just propose any person to staff security at Pride other than cops—style points, however, go to the most creative of “weaponry.” Aside from the occasional “Carly Rae Jepsen sword,” we aren’t talking deadly weapons. Just ridiculous ones.

Take Hilary Duff with that incredibly heavy barrel that she’s capable of holding above her head.

no police at pride just hilary duff and her barrel https://t.co/DubQRrCnf1

Of course, you couldn’t count Duff in without the Queen Jepsen herself and aforementioned sword.

No police at pride just Hilary and her keg and Carly Rae and her sword https://t.co/q5fApeHVNt

no police at pride, just these girlies pic.twitter.com/cx2vJwqw3q

Very pleased that the classic "give Carly Rae Jepsen a sword" pride themed meme has progressed into it's more alarming, and slightly more abstract form, "give Hilary Duff a barrel"

Pride protection squad:
– charli xcx and her katana
– Carly Rae Jepson and her sword
– Hilary Duff and her barrel
– toni collette from hereditary

no c*ps at pride just Carly Rae Jepsen with a sword and Danny Devito with a feather boa https://t.co/aA1CTUdoOo

Or Andrew Garfield and… his Tony Award for lead actor in Angels in America.

How about Anne Hathaway and this very small knife?

Or comedian John Mulaney and a money clip he can throw at would-be muggers while he runs the other way, a bit he performs in his latest Netflix standup special.

no cops at pride just john mulaney and his money clip

Or K-pop group Loona and their weapons.

No cops at pride just LOONA and their weapons pic.twitter.com/qnMAjqPiuT

“No more cops at Pride,” despite its superb memeability, is more than just a wishful slogan cheering on the likes of our favorite oddly armed celebrities. The “slogan” itself is tied to the roots of LGBTQ liberation and demands that, paying homage to Pride’s history, law enforcement has no place at Pride celebrations, no matter how well-meaning or allied these entities might be. The Stonewall Riots of 1969 were direct physical conflicts with police attempting to raid New York’s Stonewall Inn, leading to protests against the oppression of gay, queer, and transgender people.

In this context, suggesting that modern Pride celebrations prohibit law enforcement participation isn’t a joke, but a thoughtful critique of how police have previously oppressed and committed violence against LGBTQ people. Conflated with recent and prevalent abusive police behavior against people of color, the proposed exclusion of police has real-world implications for how Pride attendees move through the celebration and experience LGBTQ liberation themselves.

As them. points out, last year an officer attacked a trans woman at a Pride celebration, while Phoenix Pride attendees shut down the celebration in protest of police presence, and Toronto police were banned from celebrating in uniform. On Sunday, police arrested a young trans woman at Philadelphia Pride, stopping her from attempting to set fire to a flag showing support for law enforcement. Not only was she booked using her dead name, but law enforcement transferred her to a maximum security men’s prison, an extremely harmful environment for trans women, showing just how little police respected her gender identity while she was in custody and jailed. After more than a day in custody, she was released on bail.

Though the meme is historically rooted, it’s not immune to criticism by people who feel that not having police at Pride equates to harmful behavior and dangerous situations enacted by attendees.

Which, for the purposes of the internet, creates the perfectly made case for Pride to be protected by the likes of, say, Laura Dern and her “pew pew” blaster.

No police at Pride just Laura Dern and her blaster. pic.twitter.com/AFEHM8cMvM

Or Sandra Bullock and Cate Blanchett with their Oceans 8 bubble guns.

No police at pride just sandra bullock and cate blanchett with their bubble guns pic.twitter.com/Lp0idELTcp

And, of course, superheroes such as Bucky Barnes and Thor are prime for Pride defense.

no cops at pride just bucky barnes and his metal arm

no cops at pride only thor and drax protecting the lesbians

Watch out, law enforcement. You’re no match for protecting patrons of this year’s Pride against drag queen Katya Zamolodchikova and her scooter.

no cops at pride just katya and her scooter https://t.co/KKstMURD3O