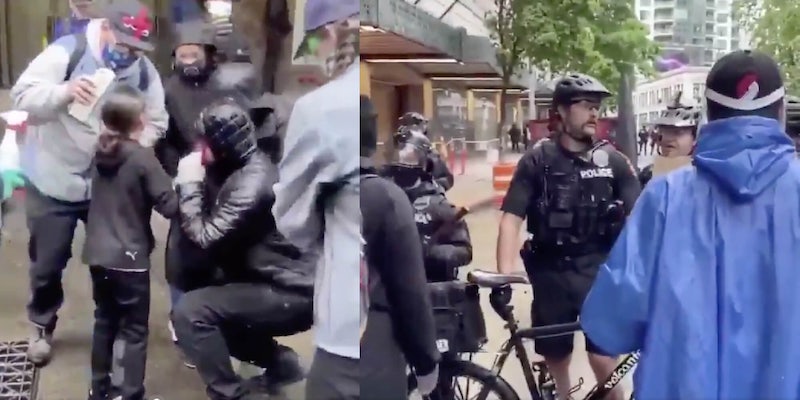 Online sleuths found his badge number and are now posting it online with contact information for the Seattle Police Department.

A video shows a 9-year-old girl crying and screaming in pain after a police officer allegedly pepper-sprayed her at a protest in Seattle.

In the video, which went viral on social media Saturday, bystanders attempt to pour water and milk over the child’s face as she screams for the pain to “stop.” She hugs onto a person who appears to be her guardian. The filmer then walks over to the suspected officer responsible for pepper-spraying the child. People online quickly identified the officer as Jared Campbell of the Seattle Police Department, and his name began to trend on Twitter Saturday.

Jameela Jamil posted Campbell’s photo to Twitter, with the caption, “OFFICER JARED CAMPBELL pepper-sprayed a 10-year-old little girl at the protest. Did she scare you in your riot gear?”

The officer allegedly covered his badge and refused to give his badge number to those asking for it. Online sleuths found it regardless and are now posting it online with contact information for the Seattle Police Department. “Hold him accountable,” one user urged.

The Daily Dot has reached out to the Seattle Police Department.