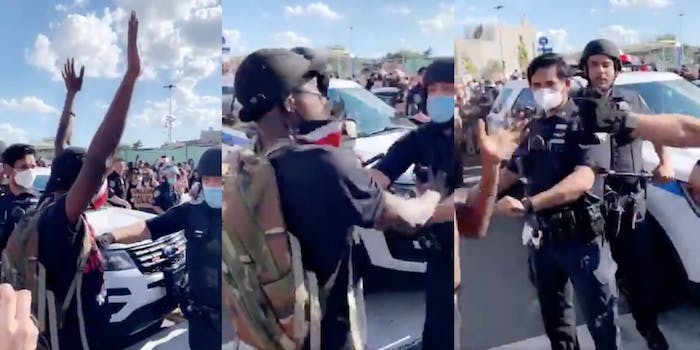 The protester's hands were up in the air at the time.

A video of a cop pepper-spraying a protester with his hands up is going viral. The video is from a protest in New York City. Viewers are appalled at the police officer’s use of pepper spray when the protester had his hands up and was not threatening the officer.

The video shows an officer instructing protesters to back up. The immediate protesters all had their hands up to show they weren’t resisting. Though sirens in the background make the dialogue inaudible, the video shows the protester was complying with the officer’s orders. Despite this, the officer pulled down the protester’s mask and pepper sprayed him, to the outrage of witnesses.

While many of the protesters closest to the officer were white, he chose to pepper-spray a Black protester.

“I am heartbroken and disgusted to see one of my family members a young black man w/his hands up peacefully protesting and an NYPD officer pulls down his mask and pepper sprays him,” the woman who originally tweeted the video said.

The woman followed up with a statement she says is from the protester’s mother.

“For the person that stated ‘we need to protect civil society’ it has not been a civil society for black men and women,” she wrote. “He did not have a gun, his hands were up, he was backing up…the one thing he could not do was not be a black man. Which means he did not have a chance.”

Viewers started sharing the video to show the violence protesters are enduring, even while peacefully protesting. “We’re seeing far, far too many scenes like this,” one user tweeted.

“Criminality under the guise of policing,” another said.

One Twitter user said unprovoked violence was “cop culture.” “These people get off on this sh*t,” they added.

New York City has seen many clashes between protesters and police officers this weekend, and it is unclear when protests will end.