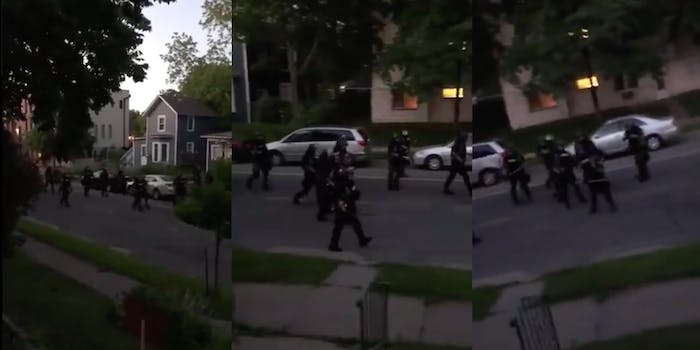 Residents ‘lit up’ by law enforcement on their own porch

In the video, law enforcement fire paint canisters at civilians in an effort to get them inside their homes.

A video making the rounds on social media appears to show law enforcement firing paint canisters at people on their own property in Minneapolis amidst nationwide protests against police brutality and racial injustice.

The footage, recorded and shared by Tanya Kerssen, features armed officers marching down a residential street in and yelling at Kerssen and her friends to get inside, despite them standing quietly far back from the street on their own porch.

Another gives the instruction to “light ‘em up!” and the men halt and begin firing paint canisters at the civilians.

“National guard and MPD sweeping our residential street,” Kerssen wrote alongside the video. “Shooting paint canisters at us on our own front porch.”

At least one person was hit in the assault, but is reportedly OK.

Minneapolis was under curfew from 8pm Saturday to 6am Sunday morning, but residents were only required to stay away from streets, sidewalks, and public spaces. It did not require people to stay indoors, though clearly law enforcement officers were telling people differently.

Like many videos from protests across the country showing law enforcement escalating and inciting violence, this short clip has sparked outrage over what many are calling an abuse of authority.

“National Guard shoots paint canister at a citizen in Minneapolis for being on her porch? – literally,” tweeted writer and activist Amy Siskind. “These testosteroned up police are out of control!”

“This literally looks like a scene out of a dystopian novel,” wrote @BalloonsPastel.

KMSP, the local Fox station, reports that the Minnesota National Guard has refuted the claim that the law enforcement officers in the video are members of the Guard. However, Kerssen insists it was a combination of the MPD and the Guard that were marching down the street.