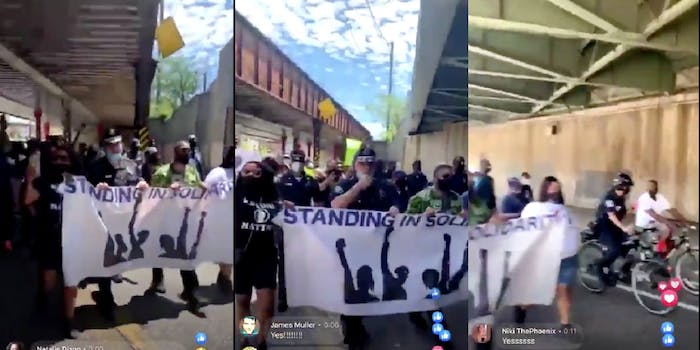 'This is how it should be.'

Viral video and photos on Twitter show some police participating in local protests rather than going against the crowd, resulting in peace instead of violence.

The content come days after protests for George Floyd in Minneapolis spurred Black Lives Matter protests across the country. Multiple viral videos online show police in other cities spraying protesters with pepper spray, shooting rubber bullets, and shoving them as they protest.

In a video posted by @AMPZ222, Camden’s police force in New Jersey joined protesters in marching down the street and carried a banner that read, “Standing in Solidarity.”

“This is how it should be, every police station should be walking with their community there is no excuse!” @AMPZ222 wrote.

Journalist James Surowiecki tweeted that Camden has “invested heavily in de-escalation training and adopted a use-of-force policy that’s been called the most progressive in the U.S.” According to an article from nj.com, the county wants its focus on violence as a last resort to be implemented nationwide.

A viral photo of police holding a sign that read “END Police Brutality” appeared to show solidarity from police in Kansas City, Missouri. Multiple replies to the tweet say after the photo was taken, the police holding the sign did not join the protest but instead sprayed tear gas and maced protesters. A video from the Kansas City Star shows police deploying tear gas hours after the photo was posted.