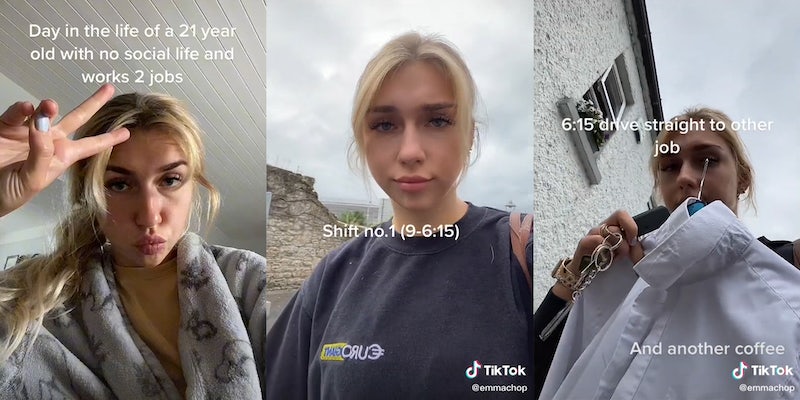 ‘That’s so depressing’: Woman shares day in the life of a 21-year-old with 2 jobs and ‘no social life’

With the economy collapsing and prices skyrocketing, many people have seen fit to take on extra work to make up for their new and unexpected budget shortfalls.

One TikToker went viral after sharing her “no social life and work[ing] 2 jobs” experience. In a video with over 285,000 views, user Emma (@emmachop) shows her work life, detailing everything in between her first coffee at 8am to her bedtime at just before 3am.

The video shows her drinking coffees, working at her job, taking care of her pets, and more before eventually returning to bed in the early morning hours.

“70 hour work week, the tax man hates me,” Emma wrote in the caption, warning in the hashtag #dontwork2jobs.

In the comments section, users noted the depressing nature of the video, with many citing the video as perfectly representing the feelings of those who work several jobs at once.

“That’s so depressing,” wrote one user.

“I was tired watching this,” another added.

“I cant imagine myself doing this for the rest of my life,” a third stated.

While some were concerned about her pets, Emma noted that the pets are well taken care of, even if working two jobs sometimes puts her at her wits’ end.

“To clarify: the dogs are well looked after, someone was coming to see them during the day to let them out,” she wrote in a comment. “Normally someone is always home, this week…Was an exception as my parents were on holidays!”

She also stated her hope that the lifestyle she’s putting on display in the video will not last long into the future.

“…this absolutely isn’t sustainable long term and I don’t do it every day, just until I’m back in college,” she wrote.

Still, the video had many pre-20-somethings worried about their futures.

“We are living almost the same life,” an additional TikToker noted. “it will get better yes or yes.”

According to the Census Bureau, women are more likely than men to have more than one job, and many who work multiple jobs work in the accommodation and food services industries. CBS News reports that many in the U.S. are taking on second jobs to cover the rising cost of basic necessities.