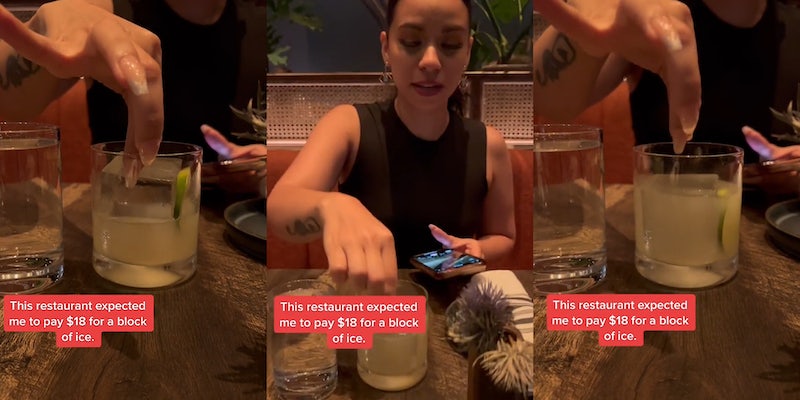 A customer at a restaurant called it “highway robbery” that her $18 alcoholic drink came with an ice cube block that took up the majority of room in her glass, admitting she received a “full glass” after complaining to the server. Her video on the ordeal backfired.

TikToker @msmabelmartinez posted the video over the weekend, and it’s since garnered over 1 million views. She put the restaurant on blast in the comments section of her viral video. “The name of the restaurant is @hiddenleaf.nyc,” she wrote.

Hidden Leaf is a restaurant that serves cuisine in the style of dishes typically found in southern China, Myanmar, Laos, Thailand, and Vietnam. An online menu posted on Hidden Leaf’s website confirms that the cocktails are indeed $18, and the restaurant offers seven different kinds.

“This restaurant expected me to pay $18 for a block of ice,” the text overlay reads as she digs in the glass with her fingers to pick up the block, showcasing how little liquid is in the glass.

“The waiter was super nice and he ended up giving us a full glass. But this was highway robbery! Not okay! Full review coming soon! #nyc,” she promises in the caption of the video.

@msmabelmartinez The waiter was super nice and he ended up giving us a full glass. But this was highway robbery! Not okay! Full review coming soon! #nyc #nycrestaurantreviews #thingsthathappened ♬ Oh No (Instrumental) – Kreepa

Many viewers criticized @msmabelmartinez for seemingly not being familiar with how much liquid a cocktail should contain. New York City is also known for its exorbitant dining prices, especially when it comes to liquor. “Tell us its your 21st birthday without telling us its your 21st birthday,” one said, while another questioned: “First time ordering a drink?”

“I feel like every month people are discovering cocktails are only 1.5 or 2oz of liquor. The norm across the industry,” a third wrote.

Others remarked that the TikToker was hit with an Uno reverse card of sorts, as it appeared that she was trying to put the restaurant on blast. “Comment section isn’t going the way you thought it would,” one claimed.

The standard amount of liquor in a cocktail should be anywhere from 1.5 to 2 ounces, according to Spruce Eats. “While every recipe will be different, a cocktail will typically call for 1 1/2 ounces of the base liquor (vodka, gin, whiskey, rum, etc.) and some recipes call for a full 2 ounces. … When it comes to pouring straight shots or liquor on the rocks, most bars will use a 2 ounce pour,” Spruce Eats notes.

It appears that the type of glass the TikToker’s cocktail was poured into was a lowball style glass, which typically holds anywhere from 8-10 ounces. Putting a ton of ice into a beverage, however, could have a significant impact on the volume of one’s drink, and, according to some, one could be receiving as little as one-fourth of what the maximum volume of a container is if it’s packed with ice.

The TikToker’s drink, however, wasn’t packed with ice but contained a large block of it. According to Martha Stewart’s website, sometimes cocktail recipes will call for a specific ice shape in order to enhance certain flavor profiles of a drink. While it’s difficult to judge the exact amount of liquid that’s in her drink, it appears that the glass is about half full sans ice cube.

The Daily Dot has reached out to @msmabelmartinez on TikTok and to Hidden Leaf via email.