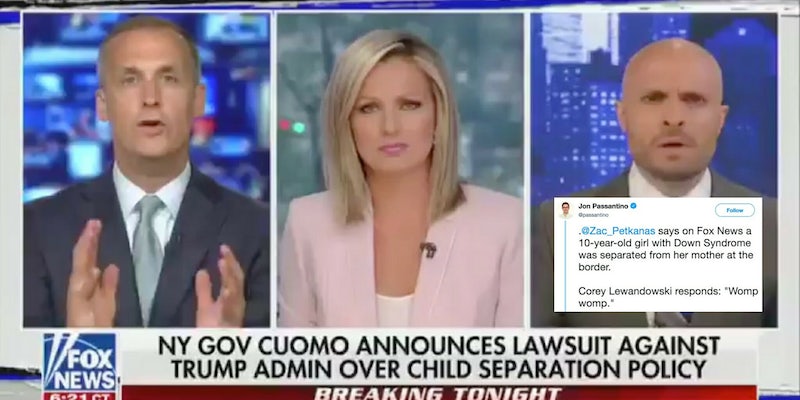 The internet wants to 'womp, womp' on the former Trump campaign chief.

People across the internet are enraged after Trump’s former campaign chief Corey Lewandowski went on Fox News and mocked a 10-year-old girl with Down syndrome who was separated from her parents.

Lewandowski appeared on Fox News on Tuesday evening to debate Democratic strategist Zac Petkanas on the Trump administration’s “zero tolerance” policy to prosecute all adults coming into the U.S. unauthorized, separating children from their parents as a result.

“I read about a 10-year-old girl with Down syndrome who was taken from her mother and put in a cage,” Petkanas said, before being interrupted by a mocking jeer from Lewandowski.

“Did you say ‘womp, womp’ to a 10-year-old with Down syndrome being taken from her mother? How dare you,” Petkanas replied, repeating the last phrase several times at his opponent.

“What I said is you can pick anything you [unclear] but the bottom line is when you cross the border illegally you have given up the rights of this country,” Lewandowski said.

Sociopath Corey Lewandowski responds "Womp Womp" to story of a Down Syndrome child being taken for her mother. pic.twitter.com/Jv9YBmmuxB

Interestingly enough, as Reveal’s (and former Daily Dot reporter) Aaron Sankin pointed out on Twitter, Lewandowski works for the Great America Committee PAC, which gets donations from the GEO Group, a company that owns private immigration detention facilities. (The Great America Committee is registered by Vice President Mike Pence.) In other words, not only did Lewandowski dismiss the concern over detained immigrant children, let alone immigrant children with Down syndrome, but he also profits off the detention of such children, and jeers “womp, womp” on the way to the bank.

Corey Lewandowski, who said "womp womp" on national TV today regarding a 10-year old immigrant girl with Down Syndrome being taken from her mother, works for a PAC that gets donations from a company that owns private immigration detention facilities. https://t.co/CQJRCGfSXy pic.twitter.com/rztMztYisI

On Twitter, critics of Lewandowski’s mocking have attempted to turn his insulting, insensitive phrase on himself, using “womp, womp” to celebrate physical harm against him, the potential downfall of his career, and his eventual death.

A little girl with Down Syndrome was separated from her mom. While that heartbreaking story was being told on Fox News Corey Lewandowski said “womp, womp” in the background.

Corey Lewandowski’s career is over. Womp, womp. Go to hell, you monster. pic.twitter.com/mnzrUilu7z

“Womp womp” is gonna be the sound I make when Corey Lewandowski loses his career because he made fun of a 10 year old disabled child.

Womp womp should be the headline on Corey Lewandowski's obituary

When Corey Lewandowski dies, I want "Womp womp" to be the opening paragraph of his obituary.

While mocking a rich white man with political power who has nothing better to say about children with Down syndrome might be fun and games, perhaps death jokes go too far. There are many other ways to blast him.

Karma just decided that from now on, whenever something goes horribly wrong for Corey Lewandowski, somebody within earshot will sing out "Womp Womp."

And this may happen more than once.

This morning, Lewandowski responded to the backlash in his trademark way of calling it “fake news” and blaming Obama.

Lots of Fake News today. I mocked a liberal who attempted to politicize children as opposed to discussing the real issue which is fixing a broken immigration system. It’s offenseive that the MSM doesn’t want to talk about the fact these policies were started under Obama.