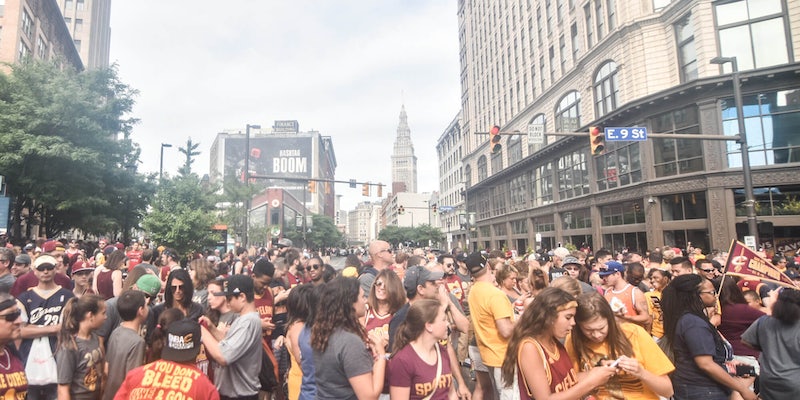 'Thankful we had such a great turnout to spread awareness for social distancing.'

Denizens of the web worked themselves into a frenzy yesterday after seeing a photo claiming to be a march to end the coronavirus in Cleveland. In reality, the photo of the wine and gold-adorned crowd comes from a post-victory parade for the Cleveland Cavaliers. But not everyone was in on the joke, and tempers flared.

The picture began circulating thanks to Twitter user @Reflog_18. They shared a post announcing that “nice weather has brought people out at the March to End COVID-19 in Cleveland today.” An attached photo showed a massive crowd in downtown Cleveland.

Given that the coronavirus (COVID-19) is massively contagious, gathering in a crowd like this would be a horrible—and even deadly—decision. As the post began to spread online, this was exactly the thought that appeared to stick with people, many of whom expressed shock and disgust at the prospect.

“I don’t understand why people are not sheltering in place, this is real keep your distance from others,” one person wrote. “Why is the City of Cleveland allowing this huge gathering.”

More people began taking part in the trolling, only serving to help it spread farther and infuriate far more people. “Chicago’s rally is crazy too,” user David Wagner wrote alongside a photo of crowded Chicago streets.

Even some of those who realized the post was made in jest were upset. “This is in terrible taste,” one commenter said. “Would you joke about this if let’s say your mother died of corona?”

They were not the only person to take offense. “Fake,” one user said. “And you’re part of the problem for posting stuff like this.”

Everyone else was too busy sharing in the joke to be offended by the alleged coronavirus march. “You’re safe,” one person quipped. “Even viruses avoid Cleveland.”

One user, @SirYacht, summed up the joke. “Thankful we had such a great turnout to spread awareness for social distancing.”