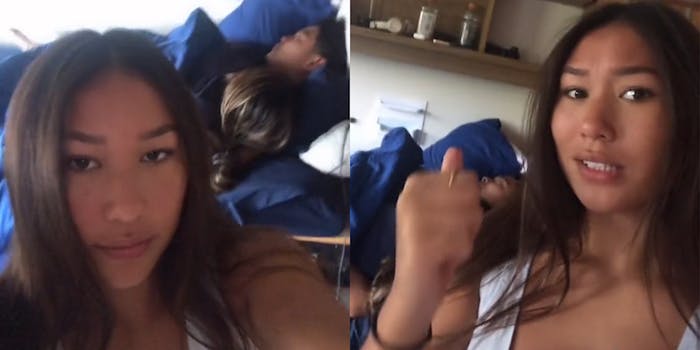 ‘I would’ve been swinging’: College student catches boyfriend allegedly cheating on her with her roommate in viral TikTok

'My favorite part is her first instinct was to make this.'

A viral TikTok video shows a college student filming her boyfriend allegedly cheating on her with her roommate.

@catcha_case posted the video on Tuesday, and it has since garnered over 1.4 million views. In the footage, she mimes rapper Khia’s “Don’t Trust No [N-word]” as she shows a young man sleeping with another woman in his arms. “You put your trust in a [N-word], stupid hoe. How you figure he won’t f*ck your best friend and your sister,” the lyrics go.

The video doesn’t show the woman’s face, only the back of her head. They appear to be in a college dorm room.

There’s no identification of anyone involved, and the “cheating boyfriend” is not featured in @catcha_case’s other videos. The video could also be staged to drum up likes, views, and followers.

Regardless, hundreds of comments poured in, with some making suggestions on how to greet the duo when they wake up.

“I would’ve closed the curtains, turned off all the lights [and sat] in the corner and stare until they wake up just to add a little more suspense,” one said.

“Pour glitter on them,” another suggested.

“I would’ve been swinging lmao,” a third said.

And some even empathized with the TikToker.

“Damn same thing happened to me a month ago,” one said.

“GIRL I BEEN THERE,” another commented.

Others joked about how @catcha_case decided to make a TikTok while in that situation.

“My favorite part is her first instinct was to make this,” one viewer commented.

@catcha_case has yet to provide an update, but many viewers are eagerly awaiting one.

The Daily Dot reached out to @catcha_case for comment.