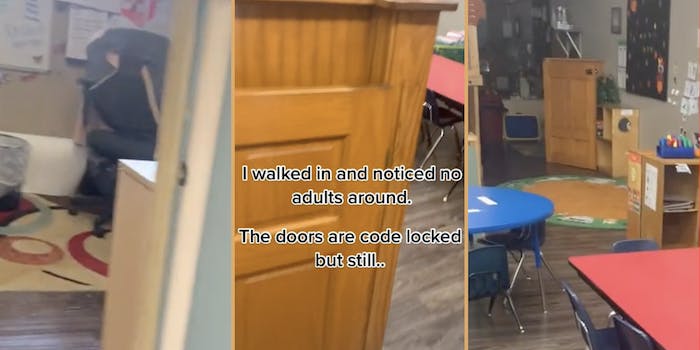 ‘Is there anybody here?’: TikToker finds kids seemingly unattended at her child’s daycare, sparking debate

'There are no f*cking teachers in my kids' daycare right now.'

A TikToker claimed that she came upon a daycare classroom, finding the children unattended in what has become a viral TikTok video, though commenters raised questions about her story and her demeanor.

The video comes courtesy of TikToker @toledo.girl420, who does indeed live in Toledo, Ohio based on her Instagram, and it’s garnered more than 8.8 million views in just four days on the platform. There are also response videos on her TikTok to a couple of questions that viewers had.

The video attracting all the attention comes with an on-screen caption that notes, “I walked in and noticed no adults around.”

It also adds, “The doors are code locked but still …”

In the TikTok video, she enters the daycare classroom and remarks, “There are no fucking teachers in my kids’ daycare right now, what the fuck.”

She then shouts out, “Is there anybody here?”

An adult voice, presumably one of the teachers, responds, “I’m right here,” and then the video abruptly ends.

The TikToker went on to explain in the comments that the daycare’s “corporate office” responded to her inquiry and noted that “the worker had a momentary lapse in judgment and realizes it’s not acceptable to leave children unattended at all.”

Plenty of people were up in arms along with the TikToker about the “momentary lapse in judgment.”

“I work at a state-licensed daycare,” one commenter asserted. “The teacher can never leave the room where the kids are. Period. Doesn’t matter if doors are locked.”

Another simply asked, “Isn’t that illegal?” (The TikToker responded, “Very.”)

Yet another sympathized, saying, “This happens daily in my town’s daycare.”

However, there were also a number of respondents who noted that there were no children visible in the daycare, and the adult immediately called out—possibly meaning that an adult was with the children after all.

Others surmised it was just the TikToker’s child alone with the adult after all the other kids had left, with one cracking, “The mom was probably late for the 100th time and the teacher’s just sitting cleaning bins, listening, waiting to give this girl her notice.”

In a response to one of the queries, though, the TikToker claimed she left visible children out of the video to protect their identities.

Others found it suspicious that the video stopped right as the adult voice was heard. One person commented, “Why’d you turn it off so fast? What’s the point in posting this? Someone was there?”

She felt justified enough in her response to make it a video, claiming, “I didn’t turn off my phone; it died on me.” She also claimed there were three children in the room when she walked in, and she purposefully left them out of the video. As she put it, “I’m not going to put other people’s children on camera.”

She also expressed concern about the neighborhood where the daycare is, noting the presence of homeless people outside the daycare—an observation that raised some ire in that video’s comment section. But, despite reporting it and creating a viral Tiktok video, she also noted that she didn’t want anyone to be fired over the incident.