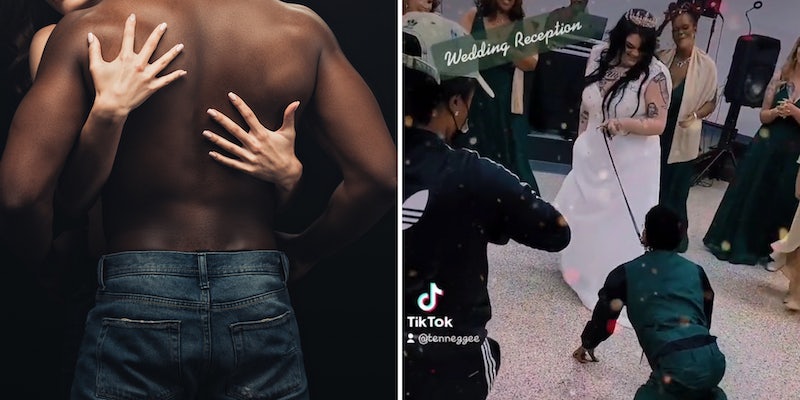 The groom says it's not a kink—it's a family tradition.

A TikTok that shows a Black man led on a leash by a white woman and dancing on all fours at a wedding is facing backlash on TikTok and prompting a discussion about the intersection of consensual kink and raceplay. The bride and groom say the dance isn’t a kink but a wholesome family tradition.

The video, which was posted on April 2 by @tenneggee, starts with a bride and a groom walking into a wedding reception. The groom has a collar and leash around his neck and gets down on his knees and crawls into the middle of the room. Weddings guests clap, dance, and videotape the event.

After the bride lets go of the leash, the groom stays on all fours and mimes lifting his leg like a dog and peeing on her. By Thursday, the TikTok had been viewed almost 345,000 times.

In a phone interview with the Daily Dot, Tra’ Alexander, the groom in the video, explained that he was doing a dance that is part of a family tradition for him: He said his father loves George Clinton’s “Atomic Dog,” the song that was playing while the groomed danced. Alexander explained that his father originated acting like a dog while the song played, so now he and his sisters do the dance, too.

“The song itself means something to me and my family,” Alexander told the Daily Dot. “[My dad] made his own dance for it [a] long time ago. And ever since, it’s been passed down to my oldest sister and then me.”

Alexander said that the dance at his wedding was a joking nod to the fact that his wife had finally got him to marry her after six years together.

“It was showing that she finally got me,” Alexander explained. “There was nothing like ‘Oh, well that’s my slave owner.'”

Without the additional context, commenters on @tenneggee’s video found the dynamic between the bride and groom upsetting and/or offensive.

“Bro just set us back a hundred yrs,” @ameliabarker172 said about the imagery of a Black man leashed by a white woman.

“This giving me the movie GET OUT vibes,” @paige_cassie216 commented, referring to Jordan Peele’s 2017 horror film about an interracial couple.

Others said a child’s presence in the video was inappropriate.

“This would have been the PERFECT time to say ‘no children at the reception,'” @jazzie_vibes commented.

A repost of the video from @friedokrahheaux compared the video to a “plantation wedding.”

“I thought these plantation weddings were bad but y’all never cease to amaze me,” @friedokrahheaux wrote in the video’s caption. Her TikTok has over 14,000 views.

In the comments of her video, @friedokrahheaux clarified that she wasn’t kink-shaming Alexander. (Alexander clarified to the Daily Dot that the leash was a joke and his dance is not a “kink”; it is a family tradition.)

“Although I do believe certain kinks should be shamed,” she commented. “If this is their kink why is this being display like this? If not what is the purpose or need for this?” Other commenters on @friedokrahheaux’s video also focused on wedding guests.

Commenters misconstrued the incident as a display of kinks including bondage (the use of a leash) and raceplay, which is a type of sexual roleplaying in which the races and/or ethnicities of participants are emphasized.

Sex educator Mollena Williams-Haas, who is Black, frequently speaks on raceplay and other related kinks. In an interview with Ebony, she explained that engaging in raceplay “is not something to be done frivolously,” and that it centers on consent.

With regard to how the TikTok has been interpreted and the comments, Alexander said that people were so “simple-minded.”

“But I mean, I can’t blame them because, look how the world is today,” he told the Daily Dot.

On Tuesday, @tenneggee posted a follow-up video of the wedding “for all the criticism.” In it, Alexander—still wearing the leash, though the bride isn’t holding it—is seen dancing and mimicking a dog with his older sister on all fours.

The follow-up video seems to have received a bit more acceptance in the comments.

“People gotta do what they into,” @theburneraccou7 commented.

“Whatever you do,” @leahlasvegas commented, “be the best at it.”

Alexander said he’s grateful to have gone viral with a dance that is so important to him and his family, regardless of what people say about it.

“This is [my] family song, you know, full of gratitude and heritage. So I don’t I don’t really care about the comments. They don’t know me,” Alexander said. “But I really do appreciate them letting me go viral.”