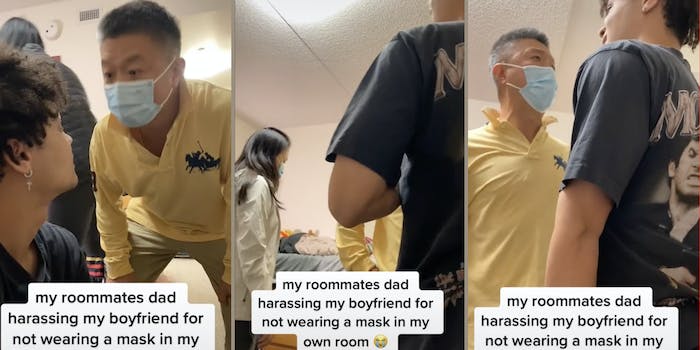 ‘I don’t know where you’re from’: Asian father tells young Black man to ‘go back to your country’ in viral TikTok

It appears the row started over a mask dispute.

A viral TikTok video shows a young Black man—the creator’s boyfriend—being yelled at in a college dorm room by her roommate’s Asian father for not wearing a mask in her room.

The video showing the confrontation was put up on @graccxx‘s TikTok account on Sunday, and has more than 3.7 million views so far.

The video’s on-screen caption sets the scene: “My roommate’s dad harassing my boyfriend for not wearing a mask in my own room.” The TikToker is also direct in the accompanying caption, instructing users to “share this shit.”

According to the creator’s Instagram account, she attends the University of Pittsburgh, and the comments in the TikTok indicated that she silently recorded the video because “campus police were on their way and needed video proof.” The creator also clarified that both she and her roommate are Asian, and alleged that her roommate was defending her parents throughout the encounter. The TikToker went as far as to say in the comments that “her mom put her hands on me, trying to stop me from recording.”

It starts with the boyfriend sitting down while the roommate’s father stands over him, yelling, “Because you didn’t wear a mask!”

The boyfriend then starts to respond, but the roommate’s father points at him and yells, “Close your mouth! Wear a mask!”

The roommate’s father then asks the boyfriend if he speaks English, and then again. As the boyfriend is starting to put together an answer, the father interrupts him, saying, “Okay, you don’t speak English, then you should go back to your country! I don’t know where you’re from!”

That leads the boyfriend to say, with a confused expression, “Is this a joke right now?”

As things heat up between them, the roommate’s father slaps his own chest and bellows, “I’m from Hong Kong! I know English!”

Then, a little further into their exchange, where it looks like the older Asian man is puffing up for a potential fight, he yells, “Show me who you are!”

The boyfriend then turns to someone in the room and registers bewilderment, and though it’s not all audible, the boyfriend can be heard saying, “He’s yelling me at me, he’s trying to get me to—”

“COME ON!” yells the roommate’s father, adding in a high-pitched yelp, “I’m so scared!”

“I’m not gonna fight you,” the boyfriend says.

“I’m scared!” the roommate’s father yelps again, before the video ends at the one-minute mark.

Commenters had a range of reactions, with a number of them commenting on the boyfriend’s resolve in not fighting the roommate’s father.

“This boy was raised right,” one noted, “’cause his restraint from swinging was immaculate.”

“Bro has insane self control,” another remarked. “My anger would take over so fast.”

Another noted, “The dad is trying so hard to be scary but we all know who would win in the fight.”

While many were still left wanting for context, a few commenters already made up their mind about the roommate’s father.

“As part of the Asian community,” one person declared, “we don’t claim him.”

The Daily Dot has reached out to the TikToker and the University of Pittsburgh police for comment.