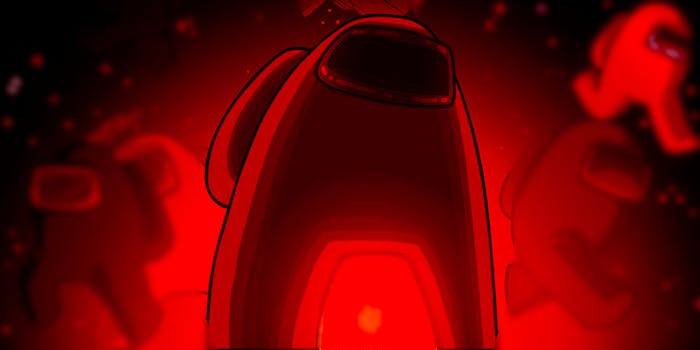 Among Us is blowing up. Blame fascism

It's 'consensual non-consent,' minus the sex.

Admittedly, I am very good at silently killing people. Whenever I get the Impostor role in Among Us—a 2D, top-down multiplayer game about astronauts rooting out alien saboteurs on a spaceship or cloud city of some sort—I pick my victims carefully. I’ll keep an eye on the map, sabotage key ship components from afar, see who joins the rest of the crew to fix the reactor or oxygen tanks, and then butcher the most isolated straggler I can find. When their body is inevitably found, I stay out of the conversation. Sometimes I’ll even report the body myself just to throw off suspicion.

It doesn’t matter how I win, just that I do, although I take a particular delight in murdering the ones who try and fail to raise suspicion against me during meetings. Killing them has a certain kind of sadistic joy to it.

Dividing, isolating, and picking off my fellow players fills me with glee in Among Us. The same thing is happening outside in the real world right now, too, and it’s giving me chronic health problems. Bit by bit, reactionary movements from the far-right are creating an irreversible rift between Trump supporters and everyone else. Meanwhile, among center-left feminists, there’s a growing puritanical, whorephobic, and transmisogynistic movement obsessed with sexual purity and conservatism: a new proto-fascist reactionary uprising waiting in the wings. These things horrify me. So why do I enjoy Among Us‘ playful sadism so much when its IRL equivalent fills me with dread? For some, it may have the same appeal as Nazi porn.

Multiplayer games about asymmetrical survival (that is, one player hunting another) have always excited me, partially because they’re power fantasies about preying on and removing whoever I choose. Deduction, survival, and outsmarting a formidable foe are all common themes in these games, just as they are IRL for me as a queer trans woman. Trans bodies are often perceived monstrous, deceptive evils that need to be rooted out and purged before they destroy the (cis, heterosexual) social fabric. We are, without our consent, forced into taking on Impostor roles, despite the fact the title is far more fitting for the bigots calling us monsters.

Nevertheless, for the first time in my life, friends and acquaintances alike are getting into games like Among Us. My college friends and I are huge fans of Push the Button, a similar deduction game from Jackbox Games’ Jackbox Party Pack 6. Other deception games have popped up during my late-night gaming sessions with my queer friends, such as the iconic Garry’s Mod first-person shooter Trouble in Terrorist Town or the witchy hide-and-seek game Witch It.

No better example exists than the on-the-nose card game Secret Hitler. Players are split into three groups: fascists, liberals, and Hitler. Hitler wants to be elected chancellor, but he doesn’t know who is or isn’t a fascist. Throughout the game, the liberals attempt to enact liberal policies or execute Hitler via fascist policy. The fascists try to implement fascist policies or elect Hitler as German Chancellor after they’ve scored enough fascist policies. To win, players on both sides have to figure out who has their back and who doesn’t. The whole experience usually devolves into arguing, lying, panicked tells, accusations, and fearmongering. It’s not that difficult to let the fascists win because liberals have an incentive to enact a limited number of fascist policies in an attempt to kill Hitler and end the game.

It may not take a lot of fascists for them to win Secret Hitler, but it takes a lot of hard work to root out fascists once they appear. That’s true in real life, too. In Antifa: The Anti-Fascist Handbook, anti-fascist historian Mark Bray notes how fascists don’t need the majority vote to implement fascism; they just need enough people to capture state agencies and gain control over the government. Fascists rely on insurgent force, voter suppression, deceit, manipulation, and violence to get enough people to install their parties into power.

Fascism is on the rise in the U.S., and every day, it gets a little hotter. Trust in the U.S. government has dipped by 50% since 2016. Fascism has shattered our sense of trust in one another, as well. One 2019 Pew Research Center poll reveals 79% of Americans agree that we lack confidence in one another.

As the Trump administration continues its war on factual reporting and dissenting opinions, the right has simultaneously gaslit us and separated us from one another by radicalizing our (former) friends and family. It’s become increasingly difficult to know who to trust. Can you really tell your centrist parents about going to Black Lives Matter protests? Can you really talk to your anti-mask sister about your mutual aid projects? Even the people developing these deception games are suspect. Secret Hitler’s creator, Max Temkin, was credibly accused of creating an abusive, racist, and misogynistic workplace environment while designing Cards Against Humanity. I haven’t touched Secret Hitler since.

Temkin’s mask was ripped off by force. Some liberals are taking theirs off by choice. Actor Terry Crews has used his platform to spread whorephobia, homophobia, and fearmongering over “Black supremacy” at Black Lives Matter protests. In late December, J.K. Rowling voiced her support for TERFdom in no uncertain terms; her new book, published this week, involves a crossdressing serial killer.

As these celebrities target marginalized people, our trust in each other, public figures, and the government is breaking down. In April, Creeping Fascism: What It Is & How to Fight It authors Phil Hearse and Neil Faulkner argued for Mutiny that neoliberalism “is now reaping the acrid fruits of the inequality, poverty, and social devastation it has created,” leaving “millions of people, mainly from poorer communities” set to pay for the elite’s decisions during the coronavirus pandemic. Sri Lankan writer Indi Samarajiva is just as blunt. On Sept. 6, he published a damning article, “A Vaccine Isn’t Going To Save America,” arguing that Americans are already experiencing social collapse and that a reliable vaccine for the coronavirus simply isn’t likely because our government is untrustworthy.

In politics, that’s a death cult. But a risk-aware consensual kink scenario turns fascism’s power on its head and eroticizes it. In many cases, it lets anti-fascists get the last laugh by mocking, sexualizing, and thus defanging fascists’ power. Through sex, we loot fascism’s aesthetics, recreate them in our anti-fascist image, and use play as a space to process our complex desires. This is pertinent to people like me whose family was in the Holocaust. It also explains why in Israel during the immediate post-war era, so many Holocaust survivors gravitated toward Nazi-themed pornography: We eroticize trauma to own it.

If kink scenes are just erotic play, then a lot of the same rules apply to video games, too. Isn’t Among Us just a non-sexual exercise in consensual nonconsent? To play Among Us, everyone agrees someone has to be an Impostor. If you are a crewmate, you are consenting to the potential to die, be manipulated, or harm other players within the play space. If you are an Impostor, you are consenting to the potential to kill or deceive. These rules are agreed upon because the players feel confident that the space they’re playing in is filled with trustworthy people with safe, healthy boundaries.

No one is actually going to get killed, let alone ejected into space. But just as Domination/submission fantasies can let anti-fascists steal and reimagine fascist imagery, Among Us and other deception games can help us process, accept, and own the fears attached to living in a society where trust is on the decline, fascism is on the rise, and death feels imminent at every corner. In both cases, we can do all this without actually facing the consequences of a fascist death cult.

Among Us isn’t just an allegory for fascism, and deceit isn’t just something fascists do, either. Left-wing protesters, political graffiti artists, and underground organizers may need to deceive authorities, counter-protesters, or nosey neighbors to protect themselves from harm. And “deception” is a politically loaded concept. Queer and trans bodies are often coded as deceptive; Carta Monir’s comic “Stealth Mechanic” for Polygon compares cis people clocking trans women to Monir playing as the suit-and-tie hitman in IO Interactive series Hitman. I suspect this is one of the reasons why Among Us and other deception games appeal to queer and trans folks in particular: When we are labeled as deceivers, why shouldn’t we become the monstrous deceivers we’re told to be?

Deception is contextual. Among Us and Push the Button speak to varying psychological needs, at times overlapping or competing with one another. But while one game can mean many things to many different people, that doesn’t explain why deception games are appearing throughout social circles right now, across the pandemic, among cis and trans, queer, and straight people. Only fascism can explain that.

Offline, America is experiencing a civilization-wide collapse. But online, the deceit, mistrust, and betrayal ends when the game ends. Everyone laughs, praises the victors, and readies up for another round. Games like Among Us, Secret Hitler, and Push the Button let us explore, unpack, and practice the investigative skills that haunt us in our day-to-day lives. They also let us understand, acknowledge, and subvert the psychology that powers fascists and bigots.

In a world where deduction, logic, shared values, and group communication are vital, sometimes we need a safe space to work through all the horror. Or safely explore it. Among Us lets us do both.