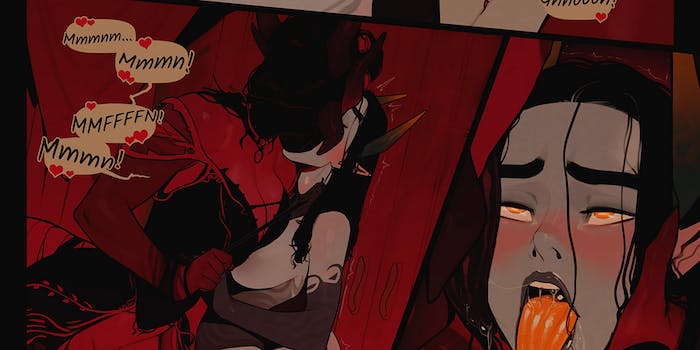 'If you're an all-powerful giantess empress, wouldn't you want to hoard a whole harem of girls?'

The Invitation by InCase is one of those pieces of adult art that seems to transcend genders and sexualities. The story begins with a Victorian-era nobleman, William Loving III, getting his hands on the “Artefact,” which he believes will prove the “existence of the arcane.” Sure enough, it does—and William is its target.

What makes The Invitation so appealing is the erotic energy that flows through the piece. William’s transformation, his ravenous need to serve the Master, and the juxtaposition between the Master’s brutality and high femme aesthetic make The Invitation the femme4femme matchup of my dreams. Whenever I read The Invitation, I want to crawl into the Master’s world and become one of her many demon girls. I don’t think I’m alone in that regard. Over the past few years, I’ve found monsters appeal to queer folks across the community, be they cis or trans, gay or lesbian, bi or pan, ace or allosexual. So what’s going on? Is this just a pervasive kink, or is there something else going on?

It seems to be both. We see our queer selves in monsters. We see the queer bodies we desire in their beautiful grotesqueness. We see the narratives that define our queer lives. There’s no better role model for the transgressive queer than the fantastical beasts of our collective imaginations.

Ryuu, a gay trans artist from Brazil, has a strong fascination with monsters that dates back to his childhood. Before he was aware of what sexual or romantic attraction was, he gravitated toward monsters, particularly dragons and dragon-like creatures. Monstrosity served as a surrogate for queer language around bodies and transgender experiences, which manifested in self-expression via nonhumanity, he said.

“From around age 6-12, I remember having very strong opinions about humans being very aesthetically displeasing creatures. On retrospect, my opinions of human bodies in general was definitely colored by my own gender dysphoria,” Ryuu told me.

“It’s very easy to relate to monsters when you’re marginalized. We’re kind of already taught to see monsters in ourselves (queer, trans, POC, etc),” Ryuu explained. “Twisting that narrative to show monsters in a positive light feels powerful. And it changed the way I looked at humans too! If you can find beauty in something as unconventional as monstrous, otherworldly, non-human creatures, what problem could unconventional human bodies pose?”

Not all monsters are fictional. Canadian Morgan L. Faye is a self-described “Orc GF” with a sizable online following. That’s not just a personality trait, either. Between Faye’s body shape, size, and numerous body modifications, she mirrors a female orc from fantasy stories.

Faye, who is trans and polyamorous, says she doesn’t fully identify with humanity, and moving away from normative human attributes “calms the shit storm of dysphoria that imprisons [her] in [her] mind.” Her body mods reflect the fact, from her horns to her split tongue. She’s also a proponent of other queers undergoing the body mod process, provided they take the risks seriously.

“I may be a bull-headed brute,” she told me, “but there’s no rule that states I can’t also be beautiful too.”

Orc women appealed to Faye since she was young, particularly for their “thick, muscular, take-no-shit attitudes” and the ways in which they are “still beautiful, but equally as deadly” as orc men. After embracing her muscular body in transition, she began exploring body mods. Since then, her monstrosity has become a core part of her identity. Others notice, often to the point of hyperfixation.

In Faye’s case, many of her fans have monster fetishes, and they fantasize sucking on her horns and ears, receiving oral from her tongue and lips, or even experiencing penetration with her horns. But just like Ryuu, Faye’s monstrosity transcends kink. Happiness and self-love, she told me, are at the core of her values, which is relatable to both monsters and non-monsters alike. And in her case, her monstrosity is a reflection of her own need for radical autonomy on her own terms. Faye’s lovers see this and “seek solace in the fact that they’re not alone in their isolation or ridicule,” and that “it’s beyond OK to look vastly different, that general societal approval isn’t a thing to seek or worship.”

“A common theme [among queers interested in body mods] absolutely seems to be embracing their perceived otherness and turning it into a strength rather than a weakness; they seemingly wish to further push themselves out from the clones and mannequins that sought to initially isolate, ridicule, or fear them,” Faye said. “For me, in being monster-amorous; it’s almost a sense of seeking and nurturing the remnant humanities, while embracing their new form; showing them tenderness in the face of a cruel work, a common bond and reason to rally.”

In her book Gothic Queer Culture, Laura Westengard argues queer and trans artists play with monstrosity and eroticized power dynamics to “challenge audiences and create discomfort” that can “shake viewers out of a comfortable sense of complacency.” Monsters also let us explore fantasies and fears through gothicism. For example, vampire fantasies may “represent ultimate submission,” or becoming a vampire may be a metaphor for letting go and embracing “power, beauty, and eternal life.”

“Artists gravitate toward those gothicisms that reflect their experiences and that best generate the interventions they are hoping to achieve, so they may appear differently in art by queer cis women, queer trans women, gay cis men, and queer trans men,” Westengard told me. “Further, people’s experience of gender and sexuality are shaped by other intersecting factors such as race, class, and ability. These elements all come together in unique and complicated ways, meaning different individuals will likely resonate with different forms of monstrosity.”

Westengard notes there’s a direct overlap between the gothic and trauma, which makes gothicism perfect for exploring queer pain in a safe way. It’s difficult to claim desiring or becoming a monster is a universal queer experience outside of the U.S. However, queerness and monstrosity do seem to intersect outside of Western narratives, which suggests monsters can be queered outside of the Western gaze.

I’ve been reading Thai author Benjanun Sriduangkaew‘s And Shall Machines Surrender, a science-fiction novel featuring a lesbian mercenary named Krissana Khongtip. Krissana is the ex-girlfriend of the book’s main character, Dr. Orfea Leung. When the two are reunited on the utopian Shenzhen Sphere, Orfea realizes Krissana has quickly received an enormous number of cybernetic implants in preparation for becoming a godlike human-AI hybrid, or “haruspex.” The book explores how their relationship transforms as the two investigate a series of haruspex suicides linked to a much larger political crisis. (Disclosure: Ana Valens is good friends with Sriduangkaew.)

I quickly fell in love with Krissana. The power and strength she has—the fact that, as Sriduangkaew reminds the reader, she could easily kill Orfea with her bare hands if she wanted to—makes her more attractive, not less. Yet, like the Master, Krissana’s desire for power, strength, and self-reliance is complicated. Despite (or perhaps because of) Krissana’s immense power, she longs to submit to Orfea, who is as adept at domination and sadism as she is at medical work.  And Shall Machines Surrender is indulgent to queer readers’ erotic appetites in this regard (a hallmark of Sriduangkaew’s fiction), and as readers we are made to both want Krissana and see parts of ourselves in her. Like Ryuu and Faye, her monstrosity is layered.

“What goes into Krissana is her desire to be liberated from the limitations of the flesh, transcend it, obtain a body that’s customized to her exact preferences,” Sriduangkaew said. “She wants to own her skin completely, inside and out. This is something I think a lot of us can relate to, and within the narrative she exists as an aspirational ideal: the superb cyborg who’s not just stunning but also perfectly made in a way flesh bodies can’t possibly be, an embodiment that challenges the world—come try me, I’m a living weapon.”

Sriduangkaew, a cisgender lesbian, is fascinated by monstrosity. As a Southeast Asian woman who grew up on East Asian media, Sriduangkaew says monstrosity is “multi-functional” and regularly appears as a “curse” or “threat” against women who do not properly perform Asian femininity. In her stories, monstrous women embrace their non-humanity, if not consider it outright “superior” to being human, and are “proud of being out of control, being complicated and as serrated as a knife.”

“My persistent idea is that the fantasy of monster women has a lot to do with power—power is attractive, you want women who have it and you also want to become one of them, because power offers freedom to act and love and desire without the terror of consequences,” Sriduangkaew said. “The horns or scales or the rest that are supposed to make monstrous women unappealing to the normative gaze become both badges of honor and signifiers of strength.”

The answer, of course, is yes.

Just like Ryuu’s monsters and Faye’s modifications, the attributes that make queer monsters desirable are the ones that empower them: their non-humanity. Embracing our queerness is the start to reclaiming our bodies and letting our inner beast emerge.

“People should strive to free themselves of the desire to appeal to the masses,” Faye told me. “Enjoy those chubby bodies, the differences that shape us, the silly or bizarre fetishes that people frown upon—quite honestly, the Karens of the world could benefit from a little unease and discomfort.”