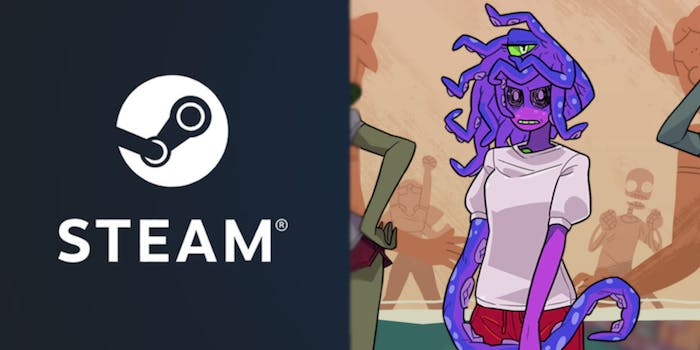 The change could be detrimental to queer developers.

Valve’s PC gaming platform Steam came under fire this week after a game developer revealed the site pulled its “LGBTQ+” and “female protagonist” sections from its new categories.

Steam categories are an extension of Steam’s “tags” system, which lets users search for games on the Steam Store based on specific content. Both the “LGBTQ+” and “female protagonist” tags still exist and can be found via the Steam “tags” page.

However, the Steam categories system provides a direct and accessible way to find new games without sorting through a wide assortment of unrelated tags. By obfuscating the category, Steam could dampen visibility for queer game developers’ titles and thus impact sales.

It remains unclear when Valve decided to remove both categories from the new feature. However, the company may have removed Steam’s LGBTQ games category first: A functional URL still works for the female protagonist page, whereas attempting to visit a URL for the LGBTQ+ section will redirect users back to the Steam Store.

This is not the first time Steam has made a decision detrimental to its queer users. When Valve removed its hub functionality for community-oriented tags in 2018, queer developers and users who used the “LGBT” tag were negatively impacted by the move, Kotaku reports. The “LGBTQ+” tag was only made official in 2019.

Over the past few years, queer developers have increasingly argued indie games storefront itch.io is far more suitable for queer creators. In the wake of the Steam Category controversy, a discussion thread on gaming forum ResetEra makes the case, arguing itch.io provides a better revenue option for developers and generally features more representation for marginalized people.

“Itch currently has a LGBTQ+ game directly listed as featured game on their front page,” thread author Toma wrote. “I just searched for 10 minutes on Steam to find a game with the LGBTQ+ tag for their new releases and front page lists and couldn’t find a single one.”

The Daily Dot reached out to Steam for comment.